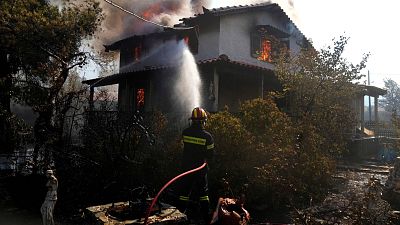 A firefighter tries to extinguish the flames at a burning house 60 kilometers northwest of Athens, Greece   -   Copyright  AP
By Shannon McDonagh  •  Updated: 07/09/2021

The Greek government announced yesterday that it is creating a ministry for climate change after a record-breaking summer of deadly heat.

Prime Minister Kyriakos Mitsotakis was forced to apologise last month for his right-wing government’s abysmal handling of this summer’s wildfires.

The huge fires, fanned by temperatures of 47.1 °C, led to thousands of people losing their homes.

Mitsotakis’ government was criticised for their unprepared and bureaucratic response to a number of heat-induced disasters across the country.

Stylianides is no stranger to crisis management - the Cypriot was in charge of coordinating Europe’s response to the Ebola outbreak in 2013.

The ministry was created after wildfires devastated more than 116,000 hectares of Greek forest in early August. https://t.co/ORB3z9KCIR

What lies ahead for Stylianides and his team will be a series of complicated challenges.

But what can we expect from this new department? Will it protect Greeks in ways their government has previously failed to do so?

The ministry’s plans are being kept under wraps

As of yesterday, Stylianides has been appointed with the explicit aim of addressing the impact climate change is having on the country.

He will be in charge of Greece’s fire departments, disaster relief and implementing new policies that show a more comprehensive understanding of the climate crisis.

Other than this, what we know about Greece’s new Climate Change and Civil Protection ministry is limited.

Some people view the move as a way forward for Greece in the midst of a crisis that has been the source of rising political tensions.

It seems Mr Stylianides accepted the job. I’m optimistic he can give us an organisation up to the enormous challenges of climate calamity, and at the very least, attempts to make the Mitsotakis government act like they run a grownup 21st Century democracy should be entertaining. https://t.co/1rTllZgWol

The original candidate for the job, retired admiral Evangelos Apostolakis, withdrew hours before he was due to be sworn in after opposition party critics accused him of being “disloyal”.

Critics of PM Mitsotaki argue that profit and capital have always been the bedrock of his policymaking, and that action taken without a cross-party consensus is a waste of time.

Drastic action in the wake of wildfires

This year’s IPCC climate report highlighted Greece as an example of the extreme weather that climate change leads to.

Many of the report’s predictions for the future are already happening in Greece. A key focus for the department will likely be a new strategy to prepare for wildfires.

In July, more than 1,000 square kilometers (385 square miles) of forest were burned on the island of Evia alone. Thousands of Greek firefighters tackled over 580 blazes across three painful weeks for people evacuated from their homes.

Experts argue that the government’s response to the disaster illustrated an ill-equipped level of austerity-driven inaction where forest protection services were left underfunded.

“During the past two years, the government focused on hiring police officers and upgrading the police vehicle fleet, but paid less attention to other civil protection services, creating a vulnerability that played out dramatically this summer,” writes Athens-based journalist Matthaios Tsimitakis.

In the days that followed this crisis, the Prime Minister announced a renewed funding package for these services. It is probable that Stylianides and his team will be tasked with how and where that money is spent.

Combatting the socioeconomic impact of heatwaves

What the Ministry for Climate Change and Civil Protection could provide is infrastructure in the event of extreme weather events like heatwaves.

Heatwaves affect millions of Greeks, and they’re only becoming more frequent. So much so, that the country plans to name any future stretches of intense heat in the same way they do with storms.

Athens is regarded as Europe’s hottest metropolis and it is also the only city in Europe to have a designated “chief heat officer”.

Last August’s summer heatwave saw many tourist attractions across the capital close when the country registered its highest temperatures in 30 years when the mercury reached 44°C. This happening on a wider scale would be a disaster in itself.

A continuation of these bouts of rapidly rising temperatures will create devastating socioeconomic consequences for people across the country as they find themselves unable to socialise and work.

What took place this summer represented a shift in the conversation surrounding Greece’s relationship with the climate crisis.

There are components of Mitsotakis’ government that may not have taken it seriously until this point, but the consensus is that it is now objectively in their interests to do so.

“I have accepted (the position) with the full awareness of the challenges and expectations that come with it,” says Stylianides.

“The consequences of climate change have overtaken us, and we must accelerate major change without delay.”

No individual or organisation is asking Greece to single-handedly solve the climate crisis. But a clear, concise action plan through this specialised department could pave the way for better mitigation and disaster relief across Europe.

Alexander Clapp, a reporter specialising in the wider Mediterranean, describes the events of this year as a “cautionary tale.”

“A state that radically reallocates existing resources and puts itself on a war footing against the climate threat, rather than against its own neighbors, could set an example for the rest of the Mediterranean, and beyond. The alternative — scorched land, rising seas, evacuated villages — is certain doom.”