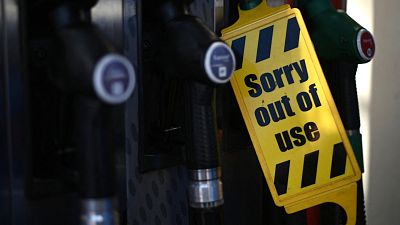 As the end of the UK fuel crisis comes into sight, officials, retailers and customers are starting to ask what caused problems with the supply of petrol and diesel in the first place.

A perfect storm of factors, including the HGV driver shortage and mass panic-buying came together with petrol stations across the UK running dry and long queues at the pumps.

More than two weeks into the crisis and around 200 soldiers were brought in to help deliver fuel.

The Petrol Retailers Association (PRA) has now announced that the government’s switch from E5 petrol to E10, which many claim is a more eco-friendly fuel, could be partly to blame for the apparent shortage.

E10 petrol has a higher percentage of ethanol in it - an increase of 5 per cent - when compared with E5. Ethanol is produced by fermenting crops such as corn and is the world’s most widely used biofuel.

It is considered a ‘greener’ fuel because the plants grown to make it theoretically absorb more carbon than they emit when burnt. Officials claim using E10 could save 750,000 tonnes of CO2 emissions every year - the equivalent of taking 350,000 cars off the road.

This switch brings the UK in line with Europe and the US and is an interim measure before the UK bans the sale of new petrol and diesel cars in 2030. It is part of the country’s plan to reach net-zero CO2 emissions by 2050 and the new fuel standard was officially introduced on September 1st of this year.

Government data shows that stocks of fuel in the UK started to drop on that date before panic buying began. Last week, the PRA argued that the introduction of this supposedly green fuel was a “major factor” in the fuel crisis.

According to Brian Madderson, CEO of the PRA, the switchover caused a dip in petrol availability as petrol stations tried to empty their tanks to get rid of old E5 stock.

When panic buying began, he told The Telegraph, the shortage of delivery drivers meant petrol stations couldn’t keep up with demand leading to the fuel crisis.

“I don't blame the Government particularly but the E10 switchover clearly had an unintended consequence: we couldn't cope with the surge in demand,” Madderson said.

Was the switch to E10 really behind the fuel crisis?

Mr Madderson later said that claims the introduction of E10 fuel was a major factor in the fuel crisis had been “widely exaggerated”.

He told the MailOnline that the PRA had shared “guidance” from the Energy Institute and advised its members to run down stocks of E5 from August onwards to comply with the law as early as possible.

Under current legislation, fuel retailers in the UK are also still allowed to use their stocks of standard E5 fuel until November 1st.

Data from the UK Government shows that deliveries to petrol stations only dropped slightly at the start of September. But on September 23rd, BP warned that a lack of HGV drivers meant it would have to “temporarily” close a small number of its petrol stations.

As more people became aware of this minor shortage, queues began to build up amid fears fuel supplies could run out.

By September 24th, sales of fuel had increased by almost 80 per cent. Drivers were buying twice as much fuel as they had been the week before.

“Temporary spikes in customer demand, not a national fuel shortage” added pressure to the supply, claims a joint statement from fuel industry representatives including Shell and ExxonMobile.

The issue was with transporting fuel from distribution terminals to petrol stations and the government has insisted that there is “no national shortage of fuel in the UK”.

It means that even if the switch to E10 was a factor, the source of the fuel crisis was more likely a combination of driver shortages and panic buying.