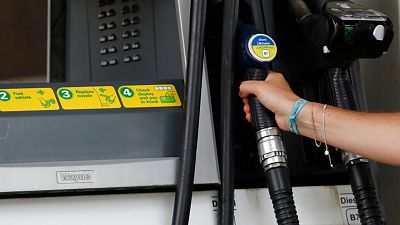 E10, a greener form of fuel, has just been introduced to petrol stations across the UK.

This blend of fossil fuels and biofuel has now been made the new standard for petrol by the Department for Transport.

Before now, the standard in the UK was E5, fuel that contains up to 5 per cent ethanol, but this change will see that increase to 10 per cent. It brings the UK in line with the US, Australia and countries across Europe.

The UK government claims that the increase could see the same impact on CO2 emissions as taking roughly 350,000 cars off the road - that's all of the cars in the county of North Yorkshire.

It says it won't be more expensive than previous petrol standards but drivers could see a 1 per cent impact on their fuel economy.

The introduction of this new blended fuel is an interim step for the UK where plans are being made to ban the sale of new petrol and diesel cars by 2030 in order to “decarbonise” transport.

“Although more and more drivers are switching to electric, there are steps we can take today to reduce emissions from the millions of vehicles already on our roads,” says UK Transport Secretary Grant Shapps.

“The small switch to E10 petrol will reduce greenhouse gas emissions as we accelerate towards a greener transport future.”

To make E10 and other blended fuels, petrol is mixed with ethanol.

This alcohol can be produced from crops like wheat or corn and is the most widely used form of biofuel in the world.

Just like making beers and wines, the crops are fermented together with microorganisms which eat the sugars and starches and turn them into alcohol. Advocates also point to the potential for the crops used to capture CO2 and offset emissions.

There is some uncertainty as to whether the emissions from burning this fuel can actually be offset by growing these crops and some people object to the idea of using food to make fuels.

While it may reduce the use of fossil fuels and CO2 emissions, E10 doesn't tackle problems of air quality and public health either.

In a country surrounded by the ocean, there is another possible source to feed the UK’s fuel evolution; seaweed. The slimy relative of algae is naturally high in the sugars need to make alcohol and can easily be fermented to make biofuels.

Growing seaweed doesn’t require land, freshwater or fertilisers either making its potential environmental impact minimal says the Scottish Association for Marine Sciences (SAMS) who are currently researching the possibility of using it as a green fuel source.

Where is E10 already being used?

Across Europe, a number of countries have been using the E10 blend for years.

The fuel was introduced to France in 2009 where it has proved a consistently popular option for French motorists year on year, thanks to tax breaks.

Other countries to have adopted E10 include Germany, Belgium, and Finland, driven by EU targets for renewable fuel sources.

Further afield, Brazil is the world’s biggest biofuel user and second-largest producer mixing its petrol with up to 27 per cent ethanol.

New cars in the South American country have been completely fuel-flexible since 2003 which means they can run on a fuel made of anything up to 100 per cent ethanol if needed.

Is E10 petrol okay for my car?

Most modern cars built after 2011 should be able to deal with the 10 per cent ethanol content being introduced in the UK.

It has been the reference fuel against which all new cars are tested for emissions and performance since 2016.

The UK government says that around 95 per cent of petrol-powered vehicles currently on the road should be compatible and this figure is increasing all the time. If your car is not able to use this new fuel, then you will still be able to access E5 by buying super unleaded petrol.

"While the vast majority of vehicles will be unaffected by the change, it is important for owners of older cars to use the government’s vehicle checker to see if they can use E10," says Edmund King, president of British motoring association, The AA.

"Even if E10 is put in a non-compliant vehicle, drivers should not panic and can simply put super unleaded in their tank at the next available opportunity," adds King.