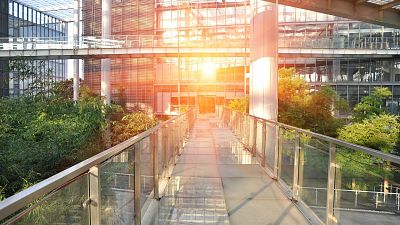 As work-life has started to return to normal, people have been wondering what companies can do to make workspaces more environmentally friendly.

If you work in an office, there are many ways that your company can reduce its impact on the environment.

Sustainability projects are a great way for companies to get staff involved in climate work too.

WWF suggests that we should make our workplaces greener through a few methods.

Extreme E does loads to reduce its climate impact. But one tip applicable to many companies is that they ask people to bring their own cutlery to save on disposable containers.

What do you want your office to do?

We asked our readers what they want their offices to do to improve their impact on the environment.

One of the most popular ideas was for offices to give employees an extra holiday allowance if they were opting to travel without using planes.

One of the most popular ideas was for offices to give employees an extra holiday allowance if they were opting to travel without using planes.

This would be especially useful if, like me, you love visiting far away places. But worry about the two weeks spent on the Trans-Siberian Railway to Kamchatka and back, when a flight would take just one day.

Another common request was that offices should install charging points for people to plug their electric vehicles in if they drive to work.

Some of our readers wanted green pensions too.

A green pension could cut as much as 64 tonnes of emissions every year compared to a standard one.

A green pension could cut as much as 64 tonnes of emissions every year compared to a standard one.

Another nice suggestion was to get time off work to do environmental projects. A day spent planting trees instead of working? Sign me up.

Are offices just greenwashing away their problems?

But sometimes, offices can use climate change as an excuse for policies that are short-sighted. Or even actively worse for the environment than keeping old methods in place.

Although some people say they want electric car charging points for their offices, some offices have started charging people for bringing their petrol cars to work.

Martha Young worked at a multi-billion pound e-commerce company in Manchester which charged an “obscene price” to park. But there weren’t many good public transport links in the local area.

“They passed it off as 'encouraging us to take public transport' - but all the execs drove these ridiculously polluting cars and had parking spaces right in front of the office. It was just the rest of us - who had no choice but to drive - who had to park 30 minutes away and pay for the privilege,” Martha says.

Another example came from Hannah Grey who used to work for a company that banned disposable plastic bottles.

But because the company had loads of clients and guests come in, to offer them water they had to keep buying brand new refillable water bottles.

One office I worked in took greenwashing to the extreme and had a bin with two openings to throw your rubbish away, depending on if it was ‘general waste’ or ‘recyclable’. The only problem was both openings led to the exact same bin.

With only one bin on the floor, I still adamantly put my cans and cardboard through the recycling hole in a futile attempt to assuage my guilt.

Putting these horror stories aside, it’s still important that companies think about their impact on the environment, as long as it’s not just for show.

How could you make your company more sustainable?