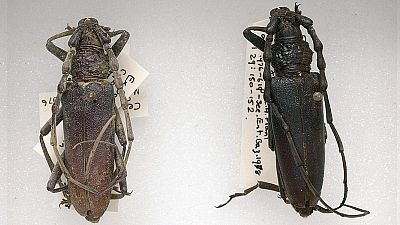 These beetles were found preserved in wood in East Anglia, and date back to even before the Romans.   -   Copyright  Natural History Museum
By Shannon McDonagh  •  Updated: 08/02/2021

Researchers believe Britain’s warming climate may result in the return of a species of 4,000-year-old beetle.

Believed to have lived among ancient Egyptians, curators at the UK’s Natural History Museum (NHM) were astonished when they received two preserved bodies of the Oak Capricorn Beetle as a donation from an East Anglian farmer in the 1970s.

Climate change has led to some considerable shifts in the way our animal species migrate, according to National Geographic. It’s often not good news, but NHM curators hope the opposite could apply for this particular species.

Samples of the beetles were rediscovered in the museum's collection, and sent off for carbon dating. It transpired they were actually 3,785 years old. That means they would precede the Roman Empire.

Insects remain one of the most threatened species in the world when it comes to man-made extinction. Now, these researchers believe there is a chance the insect will make a return to the UK.

“This is a beetle that is associated with warmer climates,” says Max Barclay, Curator of Beetles at the Natural History Museum.

He says it’s indicative of a warmer Britain of the past, given that the beetle would not be able to survive otherwise.

“Possibly it existed in Britain 4,000 years ago because the climate was warmer, and as the climate cooled and the habitats destroyed, it became extinct. Now, with global warming, there are indications that it could return to Britain in the future”.

“This pair of beetles provide a window into the ancient past and as well as hinting at what climate change holds for the future”.

The Woodland Trust have suggested that animal conservation and reintegration efforts across the UK hold mixed results.

Last year proved to be a promising year for wildlife around the globe. Technology is being frequently utilised to provide solutions for conservationists of a number of animals.

For example, 2020 was the year the bison made a return to the UK, due to wildly successful repopulation efforts across Europe.

It was even able to create new jobs, as Kent searched for its first ever bison herders.

Last year also saw the return of beavers after a successful five-year trial, with the BBC reporting that up to 500 are now housed in the UK.