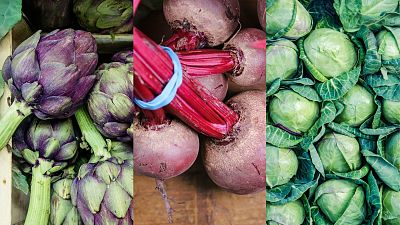 Artichokes, beetroots and cabbage will all be in season in the UK for the conference in November.   -   Copyright  Unsplash
By Rosie Frost  •  Updated: 05/08/2021

World leaders attending COP26 in November will be dining on seasonal British food after the company catering the event announced a ban on air-freighted fruit and vegetables.

Levy UK + I, which will be supplying food for the international climate conference, announced that it would no longer be using any produce that is transported by air. It is part of the firm’s ambition to become carbon neutral in the near future.

The International Transport Forum estimates that freight makes up more than seven per cent of global emissions. Air freight in particular is thought to be one of the most carbon-intensive ways to transport food.

The menus for COP26 will focus on seasonal fruit and veg, avoiding produce such as fine beans, asparagus from South America and berries that are flown from all over the world.

“It has long been our ambition as a company to divest from the use of air freight in our procurement,” says Jon Davies, managing director of Levy UK.

“We believe it is our duty to continue leveraging the power of our supply chain to drive better environmental, safety and welfare standards right across our sector.”

He adds that the decision is not about restricting choice for diners but being more creative about how the company designs and delivers food experiences for its customers.

What will world leaders be eating at COP26?

Experts have said that food needs to be at the heart of environmental action before COP26. As our impact on the Earth’s ecosystems becomes alarmingly clear, they say the systems that feed us need to be sustainable, secure and equitable.

At the conference in Glasgow, vital negotiations between world leaders are likely to be held over meals as well as in official meetings. An estimated 30,000 people are expected to attend the climate talks later this year and feeding them will be no small task.

For all of the locations that it caters, including Wimbledon, Tottenham Hotspur Stadium and The O2 Arena, Levy UK is planning menus that will evolve throughout the year depending on what is in season. In the UK in November, that means foods like cabbage, beetroot, artichokes and girolle mushrooms.

“Lots of green vegetables which can be grown right here in the UK are unnecessarily imported from abroad via this method, which carries a huge cost to the health of our planet,” Davies adds.

“On the procurement side, it’s about finding alternatives to air freight that are less harmful to the environment.”

He added that tropical fruit and avocados would still be available if there was demand but the company will be looking for suppliers close to home. Even this produce would have to arrive in the UK by boat, road or rail.

Updated: Which fruit and vegetables are in season in Europe right now?