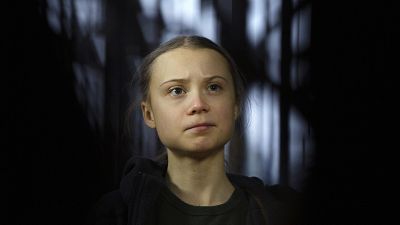 Swedish climate activist Greta Thunberg speaks with the media as she arrives for a meeting of the Environment Council at the European Council building in Brussels, March 2020.   -   Copyright  Virginia Mayo/Copyright 2020 The Associated Press. All rights reserved
By Rosie Frost  •  Updated: 09/04/2021

Greta Thunberg has said she has no plans to attend the COP26 summit set to be held in Glasgow, UK later this year.

“With the extremely inequitable vaccine distribution I will not attend the COP26 conference if the development continues as it is now,” the Swedish activist told AFP.

“Of course I would love to attend Glasgow COP26. But not unless everyone can take part on the same terms,” Thunberg wrote in a series of tweets explaining her position.

Of course I would love to attend the Glasgow #COP26
But not unless everyone can take part on the same terms. Right now many countries are vaccinating healthy young people, often at the expense of risk groups and front line workers (mainly from global south, as usual...).
Thread-> https://t.co/pr1u7TeZxn

“Inequality and climate injustice is already the heart of the climate crisis. If people can’t be vaccinated and travel to be represented equally that’s undemocratic and would worsen the problem.”

Thunberg said that “vaccine nationalism won’t solve the pandemic” adding that many countries were now vaccinating young people often at the expense of at-risk groups and front line workers - “mainly from the global south, as usual”.

Vaccine campaigners have said that the climate activist is "absolutely right" to condemn an uneven distribution of vaccines.

"Rich countries burned through the planet’s carbon budget and now rich countries’ hoarding of Covid-19 vaccines threatens to exclude low and middle-income countries from talks about a solution."

Glasgow is expected to host world leaders later this year for what has been described as the most important international meeting on climate change since the Paris Agreement in 2015.

There have already been rumours that the international climate talks could once again be postponed due to the worsening COVID-19 situation in many countries around the world.

It has been reported that the UK government is likely to make a decision on whether to postpone COP26 in the coming weeks.

But if current trends continue and the #cop26 has to be delayed that doesn’t mean we have to delay the urgent action required.
We don’t have to wait for conferences nor anyone or anything else to dramatically start reducing our emissions. Solidarity and action can start today.

Thunberg says that hosting a digital summit, one of the alternative options open to the organisers of the international climate talks, would also contribute to a lack of representation as “access to computers is extremely unequal in the world”. It could mean voices from the Global South that are on the front lines of the climate crisis are excluded, she explains.

But the climate activist believes that, even if the summit is delayed, it doesn’t mean that “urgent action” can’t go ahead.

“We don’t have to wait for conferences nor anyone or anything else to dramatically start reducing our emissions. Solidarity and action can start today.”

Will COP26 have to be postponed again?