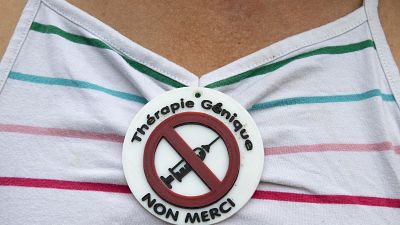 Anti-vaxxers in the UK have started to declare themselves vegans on social media, in a bid to avoid any potential compulsory vaccines.

A Twitter thread from the Telegraph stated that companies could not force employees to get the COVID-19 vaccine if they were vegan. The paper cites legal experts who argue that vegans' beliefs are protected by employment law, after a 2020 tribunal concluded that ethical veganism was a protected status.

Because the COVID-19 vaccine has been tested on animals - a legal requirement in the UK and many other countries - some ethical vegans may decide not to get jabbed.

Last week 'veganism' began trending on Twitter, as anti-vax conspiracy theorists joked that they would "become" vegan in order to avoid having to get the vaccine.

Currently, only a handful of companies are requiring that staff be double vaccinated before they return to the office - but it is expected that more organisations will follow suit. Some government ministers have lent their support to companies wishing to enact this policy, while emphasising that vaccines will never be made mandatory by law.

The right-wing political activist and former actor Laurence Fox was among those claiming to be vegan on Twitter. Fox has been a frequent agitator during the COVID-19 pandemic, urging members of the public to break public health guidelines.

After declaring himself vegan, he added, "I will only eat plant-based food and medium-rare sirloin steaks. And chicken, pork scratchings and salami."

However, vegan and animal rights activist groups have countered this social media stir by encouraging all people - including vegans - to get the vaccine if eligible. Their argument is that though the drugs have been tested on animals, this is a legal requirement in many places.

So activists are urging people to take the vaccine, and then channel their energy into campaigning to end mandatory animal testing.

What does PETA say about animal testing and the COVID-19 vaccine?

As a scientist working to end animal testing and a vegan, I’ll tell you why I’ve had both COVID-19 vaccines.

While science is changing, we still live in a world in which companies that make medicines, including vaccines, are required by government agencies to conduct certain tests on animals before they can market their products.

The COVID-19 vaccines made by Pfizer/BioNTech, Oxford/AstraZeneca, and Moderna that have been approved for use in the UK do not contain any animal-derived ingredients - although animal-derived materials may have been used in the production process.

The COVID-19 vaccines that have been approved for use in the UK do not contain any animal-derived ingredients.

It’s possible that future vaccines will contain animal-derived ingredients. An example of such an ingredient is shark squalene – an oil derived from the livers of sharks – which is sometimes added to make a vaccine better at stimulating an immune response.

But it will only be possible to know whether a future vaccine contains animal-derived ingredients if and when it is approved for use, and by that point, it’s likely we’d be able to opt for a vaccine that doesn’t contain them on ethical grounds.

The goal of being vegan and advocating for animal rights is to bring about positive changes for animals. As long as tests on animals are a legal requirement, refusing to take a medicine on ethical grounds will not help the animals who have already been used in tests or spare any the same fate in the future.

What we need is a change in the law so that animals are no longer required to suffer in tests, which is why PETA and our international affiliates are working with government agencies in the UK and abroad to draw attention to the scientific failings of tests on animals and promoting the development, use, and acceptance of modern, non-animal testing methods.

What we need is a change in the law so that animals are no longer required to suffer in tests.

We recently published a strategy for replacing animals in vaccine development and other biomedical research - which people, vegans and non-vegans alike, can support to help urge governments to end animal testing.

Greater investment in animal-free methods would not only allow scientists in the UK to develop better treatments for human diseases, but also help end the almost unimaginable suffering of millions of mice, rats, dogs, primates, rabbits, fish, and other animals in laboratories.

While vaccines are our best way out of this pandemic, we must look at what got us here in the first place. The link between humans’ treatment of animals and outbreaks of diseases like COVID-19 is something we continue to ignore at our peril.

Humans’ insatiable demand for meat, eggs, and dairy means that huge numbers of animals are reared in intensive confinement, within conditions that are breeding grounds for new strains of dangerous bacteria and viruses.

In fact, the US Centers for Disease Control and Prevention has calculated that 75 per cent of all new or emerging infectious diseases originated in animals.

But that's not the only way industrial farming is putting our lives at risk.

The link between humans’ treatment of animals and outbreaks of diseases like COVID-19 is something we continue to ignore at our peril.

Globally, animals on farms consume more antibiotics every year than humans do. These drugs are used by farmers to keep animals alive and, sometimes, promote unnatural growth - and now they are making humans sick. Bacteria become resistant to antibiotics as a result of overuse, and this contributes to the emergence of superbugs.

According to a report commissioned by the UK government, the antibiotic-resistance crisis is predicted to kill one person every three seconds by 2050.

If we’re to have any chance of preventing future dangerous diseases from emerging and spreading, we must move towards scientific methods, food, clothing, and other products for which no animals are harmed.

So, to prevent animals from suffering and humans from getting sick or dying of COVID-19, please, get vaccinated and go vegan.