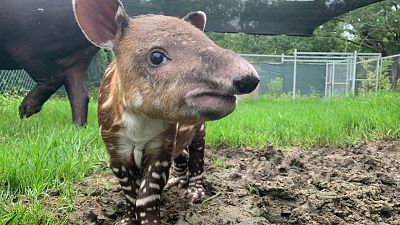 An endangered Baird's tapir calf has just been born at the Audubon Zoo in New Orleans, US as a result of a successful breeding programme.

The zoo's three-year-old Baird's tapir, Ixchel, gave birth to her first offspring earlier this month. She came to Audubon Zoo from Franklin Park Zoo in 2019 as part of an Association of Zoos and Aquariums' Species Survival Plan.

The calf shares a birthday with such celebrities as Margot Robbie and Lindsay Lohan and will serve as an ambassador at the zoo. This tiny tapir will help teach guests about the plight of this species in the wild.

The Baird's tapir is listed as an endangered species on the IUCN Red List. This means that their populations may have declined more than 50 per cent in the past three decades and are likely to keep declining at a similar rate in the next three decades.

Their greatest threat to survival is habitat destruction due to logging and the clearing of land for agriculture and development. They are also hunted for food and sport.

Tapirs, unfortunately, have a slow reproduction rate and estimates suggest that there is less than 5,500 Baird’s tapir remaining in the wild. That makes international conservation programmes like the one at Audubon Zoo essential to ensuring their survival.

Mother and calf are currently bonding away from visitors but you can catch a glimpse of the baby by clicking on the video above.