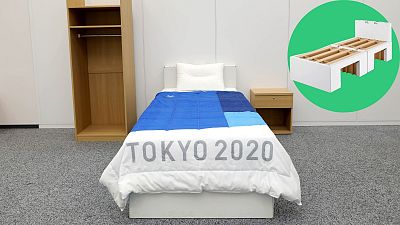 If you’ve spent time on Twitter recently, you may have seen an unusual claim circling - namely that the beds in the Olympic athletes’ village are designed to prevent sex.

The prudish accusation stems from the fact that the Tokyo 2020 organisers have opted for beds made from cardboard. The unusual modular frames led to speculation that the organisers have deliberately chosen structures that are unable to hold the weight of two people - especially if those individuals are engaging in some extra-curricular socialising.

US runner and Olympic silver medallist Paul ​​Chelimo shared photos of the beds, alleging that the design is “aimed at avoiding intimacy among athletes”, particularly in light of preventing the spread of COVID-19.

Chelimo went on to joke that athletes would need to be careful if they wet the bed, otherwise they would end up sleeping on the floor.

While athletes’ villages are somewhat infamous for their raucous activities (at the previous Games in Rio, a record-breaking 450,000 condoms were issued to athletes - enough for 42 each), and organisers are undoubtedly concerned about preventing a COVID outbreak, the beds are not deliberately sex-proof.

"The sustainable cardboard beds are sturdy!"

Irish gymnast Rhys McClenaghan even put the beds to the test himself, as a personal service for any other athletes hoping to experiment with the weight limit. McClenaghan shared a video on Twitter of himself jumping on the bed.

“Apparently they’re meant to break at any sudden movements,” says the gymnast in the video, while leaping on the mattress. “It’s fake! Fake news!”

The official Olympics channel even thanked McClenaghan for “debunking the myth”, highlighting that “the sustainable cardboard beds are sturdy!”

Though the beds have caused much amusing speculation on social media, they are far more impressive than people have perhaps realised.

This is the first time in Olympic history that athletes’ beds are made almost entirely out of renewable materials. Airweave, a Japanese bedding company, is providing around 18,000 beds and mattresses.

“Cardboard beds are actually stronger than the one made of wood or steel,” said Airweave in a statement yesterday.

The mattresses are modular, meaning they can be adapted to different athletes’ body shapes, and are made from polyethylene fibres - which, according to Airweave, can be recycled an infinite number of times.

The beds are part of the Tokyo 2020 Olympic Games’ broader sustainability plan, which seeks to ensure the environment is at the heart of the event, with a legacy that extends beyond 2021.

While the beds may be both sustainable and capable of catering to adult activities, it is worth highlighting that with three cases of COVID-19 already recorded in the athletes’ village, it probably is wise that they are just used for sleeping at this year’s Games.