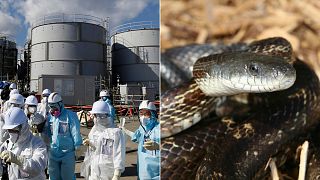 Ten years after the Fukushima disaster, scientists have discovered that snakes can be used to measure radioactive contamination in the region.

In 2011, three nuclear reactors were damaged after a 15 metre tsunami disabled the power supply and cooling at Fukushima Daiichi Power Plant. The accident was rated a 7, the highest level, on the International Nuclear and Radiological Event Scale.

Much like canaries in a coal mine, a team from the University of Georgia found that rat snakes native to the region are an effective bioindicator of residual radioactivity. This means they act as a signal for the health of their local ecosystem.

Snakes are good indicators of environmental contamination because they spend a lot of time in and on soil.

Rat snakes are constrictors and often kept as pets as their bites are not poisonous.

“Snakes are good indicators of environmental contamination because they spend a lot of time in and on soil,” says James Beasley, an advisor for the study.

“They have small home ranges and are major predators in most ecosystems, and they’re often relatively long-lived species.”

How was the experiment conducted?

Transmitters were attached to nine snakes and using a combination of GPS and local high frequency tracking, their movement was monitored.

After a month of monitoring, 1,718 locations were identified in the Abukuma Highlands, around 24 kilometres northwest of the Fukushima Daiichi Nuclear Power Plant.

The scientists found that rat snakes only travel short distances, sometimes just 65 metres, and seek shelter underground during winter months which increases their exposure to heavily contaminated soils. They are also major predators in the ecosystem and have a relatively long life span.

This means they accumulate high levels of radionuclides, unstable chemical elements that can be used to determine varying levels of contamination in the small area the snakes travelled through.

How can snakes indicate the health of an ecosystem?

The research team says snakes are better indicators of local contamination than more mobile animal species such as wild boars, songbirds or the East Asian raccoon dog. Data from the study could help to clarify how the habitat of species like the rat snake affects their exposure to radiation.

“Our results indicate that animal behaviour has a large impact on radiation exposure and contaminant accumulation,” says the study’s lead author, Hannah Gerke.

“Studying how specific animals use contaminated landscapes helps increase our understanding of the environmental impacts of huge nuclear accidents such as Fukushima and Chernobyl.”