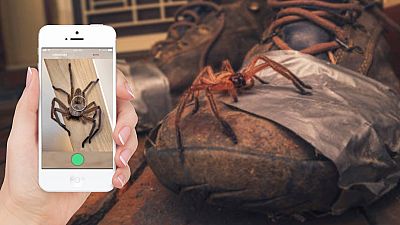 If you’ve ever come across a snake or spider and wondered whether it could kill you, there’s an app for that now.

It might not be particularly useful in Europe, but Critterpedia could save lives Down Under, where it is being launched. Australia is home to 170 species of snake, most of which are venomous, and 2,000 species of spider.

Although fatal bites from snakes and spiders are increasingly rare in Australia, it’s still particularly useful to know which animals you can swat away with your hand and which you definitely need to call an expert for.

This is where Critterpedia comes in. It’s an app which allows you to upload a photo of a snake or spider, and then immediately tells you what species it is - and whether you need to be scared or not. The programme analyses your photo, and then uses a smart algorithm to figure out the classification of the species.

The data behind the app comes from a partnership between founders Nic and Murray Scarce and the Commonwealth Scientific and Industrial Research Organisation (CSIRO)’s Data61 department.

Nic is originally from the UK, so when she moved to Australia she found herself “with an English expat heightened paranoia of Australia’s ‘deadly’ wildlife.” When her mother came to visit, Nic and her husband Murray saw the need for the app.

“During one of her trips to Australia, my mother-in-law acted as a magnet for all of our country’s big-name snakes, spiders and insects,” explains Murray. “The questions relating to their identification and danger levels were relentless, and the fact that we didn’t have all the answers simply exacerbated the situation.”

After searching for a programme like Critterpedia, the pair realised there was a major gap in the market for a resource like this, and turned to CSIRO for help.

Currently the programme is still in testing phase, and is described as a ‘learning search engine’, so it will continuously update its information as the initial users begin to interact with the app.

While a lot of the data already exists, it can be difficult when two types of spider or snake look almost identical.

“The visual differences between two species can sometimes be quite subtle, and so a great deal of training data is needed to adequately identify critters,” explains project lead and Data61 researcher, Dr Matt Adcock.

“We’ve started off with an enormous amount of images sourced from zoological experts collaborating with Critterpedia, and have developed a suite of tools to help semi-automatically label these images, verify the information, and cross check with other data sources.”

Users can also opt to contribute their own photos to help improve the system, as part of the phase one testing process.

For anyone with a fear of snakes or spiders, hiring an exterminator might seem tempting. But the creators of Critterpedia hope their app can help instil a sense of harmony between humans and Australia’s “misunderstood” wildlife.

“Educating people on our wildlife in a fun, and interactive way, especially focusing on our venomous friends, and delving into the reasons as to why people harbour so many fears, is the key to delivering a platform that can really make a difference to peoples’ lives,” explains Murray.

“Critterpedia can create a world where people of all ages, backgrounds and status can appreciate and respect our environment, and where we and animals can peacefully coexist,” he adds.