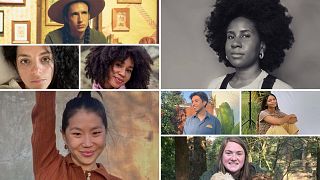 Young people are weaponising their platforms in the climate fight now more than ever.

And they're doing it more and more on social media - from Instagram reels to EcoTok videos, caring about the climate is cool.

Here are eight activists you can follow who use their following to educate those around them about climate change, intersectional environmentalism, and how to live more sustainably in simple but effective ways.

With a bio that reads “climate optimism + justice” Leah Thomas is a content creator and educator on all things environment.

Thomas shares daily with her 227K followers about intersectional environmentalism, an approach which shows the way that people’s social identities can overlap, creating compounding experiences of discrimination.

She can often be found growing her own plants and reassures her audience that your sustainability journey doesn’t have to be perfect.

Leah has partnered with notable companies such as Free People, United Airlines and TED in the past.

With a background in Environmental Science from Scotland’s University of Dundee and a Masters in Environmental Protection and Management from Edinburgh, Laura Young is a climate activist and a zero waste advocate.

She most recently partnered with brand Oato, who have begun to offer oat milk deliveries in glass bottles as an alternative to the cartons dairy alternative options often come in.

Co-Founder of ‘Seize the Vote’ Samia Dumbuya is a self-professed ‘Climate Justice Activist’ who uses her platform to highlight injustice and positive representation in the climate justice movement.

From sharing relevant reading materials such as Naomi Klein’s Shock Doctrine to blogging about their work with Young Friends of the Earth, Dumbuya is a shining example of how activism can be a part of your wider narrative as an individual - and how small changes can go a long way in inspiring others.

Climate activist and anti-racism activist Mikaela Loach is someone who believes in the movement so fiercely that she travelled down to London (she normally resides in Edinburgh) to support the 2019 climate change strike that took place in the capital.

Loach’s feed is a mixture of imagery, showcasing her daily joy paired with captions that are either educational or offer a glimpse into the reality of Loach’s life as a climate activist with a large platform.

Optimist, journalist and filmmaker Sophia Li is a climate educator.

Her most recent project sees her, along with another favourite educator on this list, Celine Semaan, launch ‘All of the Above.tv’ - their own tv channel geared toward climate change and social justice.

The channel was launched in partnership with Ecosia and The Slow Factory meaning that with every episode they aim to plant 1000 trees.

Li’s work as a journalist has primarily focused on societal and racial justice. As a Chinese-American, Li has been outspoken against the most recent wave of anti-Asian hate crime in both the US and elsewhere.

Founder of The Slow Factory, an educational platform which works within the fashion sector to seek environmental change within the industry, Semaan has been working as a climate educator since she was very young.

As a Lebanese refugee, now living in New York, she spends most of her time spreading awareness about the ‘intersection of climate justice and human rights.’

She also uses her platform to teach her followers and members of The Slow Factory about how colonialism has affected the fashion industry.

Semaan hosts ‘All of the Above.tv’ with Sophia Li.

With a pastel themed grid, Isaias Hernandez is the aptly named ‘Queer Brown Vegan’ whose work is geared towards educating their followers about veganism, sustainable living and the zero-waste movement.

Hernandez uses their platform in a manner that is part-infographic carousel and part-educational videos.

They've worked with sustainable brands including, CleanCult, Moonshot Snacks and AlmondCow to test and inform their followers about what products are worth adding to your basket the next time you choose to shop sustainably.

Xiuhtezcatl hails from an incredible activism background. His mother is the founder of Earth Guardians, an organisation which trains young people to be leaders in the environmental, climate and social justice movements across the globe.

As a musician and climate activist, Xiuhtezcatl** uses his voice to share the story of his Indigenous background** and unravel what makes mainstream hip hop music.

He employs his multilingualism to straddle various worlds and has been outspoken about how fossil fuels impact Indigenous and other marginalised communities.