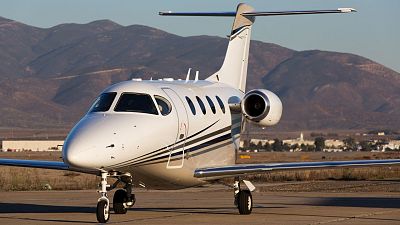 Britain has been found to be the worst culprit for private air travel pollution in Europe, according to new research.

The report by Transport & Environment (T&E) shows that CO2 emissions in Europe increased by nearly a third between 2005 and 2019. Flights that entered or left the UK accounted for nearly a fifth of these emissions, making it the most polluting country.

The findings are particularly pertinent as ongoing debates continue in the EU over a green deal and the potential of bringing in a frequent flyer tax.

During the 14-year time period scrutinised, private jet emissions rose even faster than those of commercial aviation. The research discovered private jets are 10 times more ‘carbon intensive’ than airliners on average and 50 times more polluting than trains.

Transport & Environment also looked at the use of private planes last year, when the majority of us were under nationally imposed lockdowns. While flights were being cancelled and we all stayed at home, private jet traffic actually returned to pre-pandemic levels by August 2020, as high-flyers (pun intended) took travel into their own hands.

Six of the most polluting routes for private aviation either arrive or depart from London airports, according to the study.

But alongside the UK, France also ranked highly for private jet usage, with the countries together representing almost 40 per cent of emissions in Europe.

Perhaps one of the most shocking insights from the report is that 78 per cent of UK flights are described as “short hops within Europe”. Despite the plane shaming movement taking off in recent years, spearheaded by activist Greta Thunberg herself, it seems tourists are still taking to the skies for their summer holidays.

As private jet owners have an average wealth of €1.3 billion, the report suggests that they could be part of the solution. With wealth on their side, they could pay for the development of greener technology to help accelerate innovation and “clean flying” for everyone.

“Flying on a private jet is probably the worst thing you can do for the environment. And yet, super-rich super polluters are flying around like there's no climate crisis,” says Andrew Murphy, Aviation Director at T&E.

“The upside is that the private jet market is ideally suited to help bring about aviation's Tesla moment, making hydrogen and electric planes a reality.”

As private jet owners have an average wealth of €1.3 billion, the report suggests that they could be part of the solution.

Another way jet owners could do their bit is by paying a proportional amount of tax to match the carbon impact of their flights. Currently private jets are untaxed in most European nations because of exemptions from the EU’s carbon pricing scheme (EU ETS) and untaxed kerosene.

T&E calculates that a jet fuel tax applied to flight distances could raise €325 million per year if applied to all flights departing from the EU and UK. Revenues raised in this way could be used to accelerate the decarbonisation of the aviation sector.

“European policymakers need to urgently start taxing fossil-fuel powered private jets and ban their use by 2030. The revenues raised from the super-rich could be invested in greener technology that could clean up flying for everyone,” concludes Murphy.