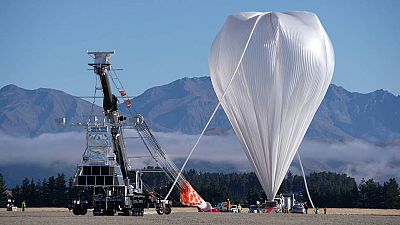 One of NASA's super pressure balloons used in the 2020 New Zealand Campaign. The Harvard University backed project will likely be similar to this balloon.   -   Copyright  NASA
By Maeve Campbell  •  Updated: 24/03/2021

In the race against climate change, scientists at Harvard University propose that dimming sunlight could cool down the planet.

But what does that mean? The ambitious project involves launching a huge balloon into the stratosphere, carrying 600kg of calcium carbonate - or chalk, which would be sprayed 12 miles above the Earth’s surface.

Scientists will then monitor how the dust particles interact with the atmosphere. It’s a process known as solar geoengineering.

The chalk would, in theory, reflect sunlight and in turn slow global warming. Some experts predict the sky would also shift from blue to white during daylight hours.

Originally announced in December 2020, the idea has recently received support from Microsoft co-founder and 4th richest person in the world, Bill Gates, which has raised its profile significantly. The experiment will allegedly cost around $20 million (€16.8 million).

The project is "not a solution to climate change," Gates told Euronews, "at most, it would delay the problem for 10 or 15 years while we get rid of sources of emissions."

He added, "But when you're faced with this catastrophic problem, proving which paths are a dead end, which are not, we need to get going on that."

The balloon launch test, which could happen as soon as June of this year, will take off from the town of Kiruna in Sweden. The country is described as having “promising flight trajectories and significant experience launching scientific balloons” by the Keutsch Group at Harvard.

And this isn’t the first time balloons have been launched into space. Around 300 stratospheric balloons were launched worldwide in 2019 for other scientific purposes, according to SCoPEx (Stratospheric Controlled Perturbation Experiment) Harvard officials.

In fact, stratospheric balloons are flown regularly. Google’s Loon program launched at least 35 balloons this year, seeking to build a new layer of connectivity technology in the stratosphere to expand internet access worldwide.

But would the balloon really slow down climate change?

Critics of the project are sceptical, claiming that cooling the planet in this way would only mask the problem of climate change rather than offering any sort of solution.

Engineering the climate with what is essentially an artificial sunshade doesn’t address the root cause of the crisis - the amount of carbon generated by fossil fuels all over the world.

Many fear that it could undermine international commitments to act under the 2015 Paris climate agreement and could also have unwanted side-effects.

“It must be stopped,” she begins.

“We’re talking about a technology with the potential for extreme consequences that could alter hydrological cycles, disrupt monsoon patterns and increase drought. It stands out as unmanageable and too dangerous to ever be used,” Sandahl tells Euronews Living.

She says that the project is “a false solution that dilutes focus from the necessary actions to reduce emissions,” adding that the test “seriously risks tarnishing Sweden’s international standing” as a climate leader.

“It is extremely risky in many ways,” she tells Euronews Living. “If implemented at the scale necessary to have an impact on global temperatures, they could cause inherently unpredictable shocks to the climate system.”

Both Sandahl and Wronski’s main concerns are that the project will create an impression that continuing the use of fossil fuels is possible.

At the time the balloon project was announced, one article in Indian environmental publication Down to Earth called geoengineering a “dangerous, techno-utopian dream”, warning against the risks of manipulating Earth’s natural systems. Other examples of solar geoengineering include aerosol injection, marine cloud brightening, high-albedo crops and buildings and cloud thinning.

No one knows quite what will happen yet when the chalk is released during the test flight, but David Keith, professor of applied physics and public policy at Harvard University, believes it could be beneficial to the planet.

Keith and fellow SCoPEx scientists published a paper in 2017 suggesting that the dust may even replenish the ozone layer by reacting with ozone-destroying molecules.