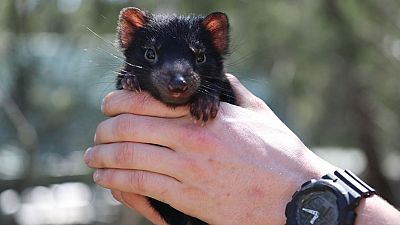 Tasmanian devils were reintroduced to the mainland of Australia a few months ago and started breeding right away. This raises hopes that the endangered species will thrive on the mainland of Australia once again 3,000 years after the marsupials disappeared from the continent. They are believed to have been wiped out by packs of dingoes - wild dogs native to the vast continent.

In October 2020, conservationists announced a big step in saving the devils; they released 26 of the iconic species in a 400-hectare wild sanctuary at Barrington Tops, north of Sydney. The historic return to the mainland was a collaboration between organisations Aussie Ark, Re:wild and Wild Ark and gained the support of actor Chris Hemsworth and his spouse Elsa Pataky. They both took an active part in releasing some of the first Tasmanian devils on the mainland.

At the time, conservationists described it as a "historic" project akin to the successful return of wolves to Yellowstone National Park in the United States in the 1990s.

Don Church, president of Re:wild, says the birth of the joeys was "one of the most tangible signs" the reintroduction project on the mainland was working.

Aussie Ark plans to release more Tasmanian devils into the sanctuary in the coming years along with quolls, bandicoots and rock wallabies, before eventually introducing the animals to unfenced areas where they will contend with a greater number of threats.