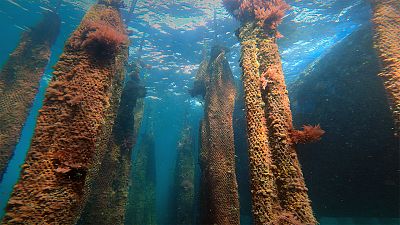 In Mutriku, northern Spain, scientists from the AZTI research centre are working on a European project that aims to replace plastics used in aquaculture with something more environmentally friendly.

Local entrepreneur, Imanol Gurruchaga, runs an open-water mussel farm where mussels are grown on long ropes, suspended underwater. Mesh protects them from predators. The ropes and the mesh used are made of plastic. When they are no longer of use, they become a problem.

Imanol tells us that "all aquaculture generates some plastic residue, whether it’s the production of salmon or sea bream". His aquaculture farm uses ropes to grow mussels and he points out that "there are many ropes, and many ropes create a lot of waste".

However, local authorities are increasingly pressing for change. "They are already asking us to do all our ecological production with biodegradable ropes within a year or two”, Imanol adds.

To find a solution to plastic waste in the sea, researchers working in the European project, BIOGEARS,- have developed compostable aquaculture ropes. Leire Arantzamendi Egiguren is the project coordinator and she works for AZTI. She says that their first net prototype developed with BIOGEARS "contains bioplastic materials of natural origin". According to her, it makes them biodegradable and they can thus be "more environmentally friendly and can provide added value to the sector".

Instead of petrochemicals and fossil fuels, scientists have made compostable plastics from natural components derived from renewable biomass, like plant-produced sugars. Their experiments with various “recipes” have resulted in a collection of potential rope materials. The goal is to find plastics that won’t decompose at sea, but will turn into compost when they are no longer of use.

Mari José Suárez, researcher in functional and sustainable polymers at GAIKER, tells us that "plastics are not just oil, they contain other types of components that can be natural. They have small types of additives that can be organic. All that can be part of the composition of plastic".

But can the industry use this bio-material on existing production lines? At the Itsaskorda rope factory, which is also participating in the project, they produce three to four tons of rope every day. This production is mostly for fisheries and aquaculture. Its machines are meant to work with traditional plastic pellets. But the managers there say producing compostable rope prototypes required only minimal adjustments, and the results seem to be as strong as the usual plastic gear.

Mikel Aguinaga, co-manager of Itsaskorda tells us that their "main challenge is to determine the right components" for the plastic material used to make the ropes. After that the must also "ensure the supply of the necessary quantities of these components for industrial-scale production and keep costs competitive”.

The compostable ropes are now being tested on mussel farms.

But what can we do about existing fishing nets which are one of the main sources of plastic pollution in the ocean? It's estimated that around 640,000 tons of fishing equipment are lost or abandoned in oceans every year. Ghost nets take centuries to degrade, trapping marine animals, polluting the water with microplastics and increasing navigational risks.

One trawler that operates out of the port of Vigo in Galicia regularly carries around 20 tons of plastic nets. During its long fishing journeys in the Atlantic, bad storms or sharp rocks can tear off pieces of this expensive gear. Sometimes, in rare cases, entire nets are lost.

Researchers from another European project, Oceanets, have made a web-based tool for skippers to log lost gear publicly. Ángela Cortina, the R&D Project manager for the Fishing Vessels' Owners' Co-Operative of the Port of Vigo, says that thanks to this tool, "if someone encounters a problem, they can flag it so that others know that in that area, at a certain depth, at certain coordinates, there is an obstacle that can break their nets or even cause them to be completely lost".

Fishermen constantly repair their nets, cutting away damaged sections. These cuttings can be used as raw materials for new products, reducing the need for newly extracted oil. In an average week, the port of Vigo collects a whole container of cuttings.

One of the goals of the Oceanets' project is to show the business value of such recycling. According to Ángela, it's not waste because "polyamide, like polyethylene, like polyester, are fibres that can be recycled".

Some of the cuttings collected at the port of Vigo are shipped across Spain to Valencia for research experiments.

The AIMPLAS technology centre specialises in plastic innovations. Its aim is to solve associated environmental challenges and add value to companies working in this sector.

Together with other partners in the Oceanets' project, researchers have developed mechanical and chemical ways to recycle old nets. One good example is when they shred pieces of nets into tiny fibres that are then melted together. This process, known as compounding, produces plastic granules that can be used to make yarn for synthetic textiles. The project has even recycled some fishing nets into fashionable sportswear.

Sonia Albein Urios, researcher in mechanical recycling at AIMPLAS tells us that "the quality and the finish of the final product are quite good". They think that clothes made from recycled polyamide will reach stores across Spain and across Europe.

As extra sustainability will attract more customers, researchers suggest certifying the origin of this material with a special tracing additive. It makes recycled granules and fabrics shine green under specific light, unlike non-recycled plastics. The goal of this is to protect this product from counterfeits and black market competition.

From recycling existing plastics to embracing biodegradable alternatives, marine industries are paving the way to a future that relies less on oil, a future where the oceans are cleaner and healthier.