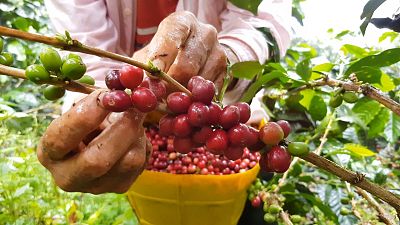 Colombia might be the world’s third-largest coffee producer, but the climate crisis is causing new challenges for its growers.

In a new study, scientists have used models to predict how climate change will affect coffee growers in the South American country from 2042 to 2061. It shows that regions which rely on the crop for their livelihoods could experience the “important implications” of global warming in coming decades.

Coffee plants are incredibly sensitive to unpredictable weather. This affects both the quantity and quality of beans that can be produced, according to World Coffee Research.

Due to rising temperatures, areas of Colombia that are currently prime coffee growing locations could soon be too hot and dry for these plants to survive. Those that now produce marginal amounts of beans may in the future see an increase in production.

Overall production in the country is not predicted to decrease, but national averages hide a wide variation of outcomes for growers in different regions.

“Low-altitude municipalities will be negatively affected by climate change, and thousands of growers and their families in these areas will see their livelihood jeopardised, because productivity is likely to fall below their breakeven point by mid-century,” says lead author Federico Ceballos-Sierra.

The key difference in how climate change will affect where coffee is grown in the future is altitude. A study in 2015 found that temperature increases of between 2 to 3 degrees would push the production of Arabica coffee beans around the world up into the mountains and forested reserves.

This global shift in where coffee can be produced will cause different challenges for growers in Colombia’s diverse coffee regions.

“Colombia is a large country with a very distinct geography. The Andes Mountains cross the country from its southwest to northeast corner,” says Sandy Dall’Erba, co-author of the study.

“In the future it will be more beneficial to grow coffee higher up in the mountains. So for those who can afford it, buying land in those areas would be a good investment.”

But the researchers say production cannot keep moving to higher areas. Relocation is also expensive and not necessarily an option for the 550,000 Colombian smallholders who currently rely on the crop for their income. Around 80 per cent of coffee sold worldwide is grown on smallholdings across Africa, Latin America and Asia.

So what’s the solution?

“Future studies can look into different adaptation strategies and their costs, and evaluate which options are best,” says Dall’Erba. These strategies include options such as better irrigation, shading crops with a forest canopy or looking to coffee varieties that are more resistant to global warming.

“Beyond the 40-year horizon we focus on, the prospects might be grimmer without adaptation.”