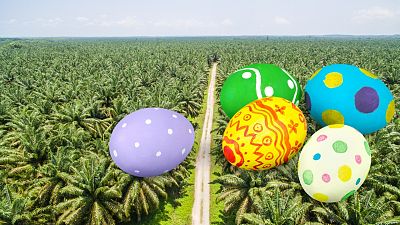 As Easter approaches, shop shelves are stacking up with chocolate goodies from around the world. Chocolate eggs, chocolate bunnies, chocolate spreads - the choice is vast.

What most of these products have in common, however, is that they contain palm oil.

Over the last few decades, the production of palm oil has considerably increased. Between 1995 and 2015, it has gone up from 14 million tons to more than 60 million tons.

At the same time, the debate around its impact on ecosystems and its health consequences has built up too. The scientific community still disagrees on many aspects, so we decided to investigate.

The huge oil palm forests all over the world

The oil palm tree has a long and rich history. For many centuries, it has been cultivated as a source of food and fibre by people in western Africa, where it originates. It is also thought to have been harvested by our hunter gatherer ancestors for thousands of years. Large oil palm forests can now also be found in south-east Asia and Latin America, as they were introduced in these regions in the 19th century.

Palm oil is currently the most produced and consumed oil in the world. And chocolate is not the only product that contains it. This oil is present in most consumer goods and cosmetic products we can buy in shops. Research by WWF has even suggested that about half of the packed products sold today in supermarkets around the world contain palm oil - whether it’s your extra large pot of Nutella, pizza dough or instant noodles, or even lipstick and shampoo.

Palm oil gives chocolate and other food products their smoothness. In cosmetics, it increases the viscosity and is used to retain moisture in the skin.

It is not difficult to understand the causes of this boom in the production and consumption of palm oil. The oil is extracted from a particularly productive crop. On a per hectare basis, oil palm trees are up to 10 times more efficient at producing oil than other crops, such as rapeseed, soybean, olive and sunflower. T

he trees also have a long life expectancy, their productive lifetime is around 30 years.

The widespread production of palm oil has been controversial in recent years because it is associated with large-scale deforestation. This has been well documented by both academic studies and satellite data.

“The trees that produce palm oil are native to tropical regions, needing hot and relatively wet conditions. In these areas there is little land available for cultivation, apart from areas that may be, or may once have been tropical forest. Therefore, palm oil is often attributed with tropical forest deforestation" says Dr Jake Bicknell, a conservation scientist at the University of Kent.

He continues, "tropical forests are one of the most ecologically complex and biodiverse biomes, and the world’s largest carbon store, so their loss is disproportionately negative for the sustainability of our planet."

A 2013 study by the European commission showed that between 1990 and 2008, 239 million hectares of forests were cleared worldwide, in particular in Indonesia and Malaysia, to make way for oil palm tree crops. Unfortunately, this is a trend that keeps accelerating.

One of the main issues is that tropical forests could host five times more animal species than these plantations. So, by destroying them, we are seeing habitat loss for some of the world’s most endangered species, such as orangutans and sumatran tigers.

Conservationists are wary however of implementing a ban on palm oil, as this would not solve the problem entirely. “An outright ban on palm oil is potentially dangerous," Bicknell goes on.

This is because the alternatives to palm oil are probably worse for the environment. "Palm oil requires between four and ten times less land, and far less pesticide and fertiliser to produce the same amount of oil compared with other oil crops. So banning palm oil, and shifting the demand onto crops such as soy, could be counter-productive,” he says.

Alternatives may include coming up with new designs of the landscape to optimise biodiversity in palm oil landscapes. “This involves protecting forests along rivers, such that they join up patches of high quality forest within the palm oil landscape, allowing wildlife to move more freely.

In addition, the evidence suggests, that environmentally conscious retailers and consumers should buy palm oil only from sustainable sources, such as that certified by the Roundtable on Sustainable Palm Oil (RSPO),” Bicknell adds.

The health consequences of consuming palm oil have also been widely discussed. Most of the criticism focuses on the risk of cardiovascular disease. Studies that have looked at this more rigorously have found it challenging to quantify the true link between palm oil consumption and cardiovascular disease and mortality.

Part of the reason is that it is difficult to identify, within a person’s diet, the effects of palm oil compared with the effects of other food items. While there seems to be a positive association between a higher intake of saturated fatty acids (present in palm oil) and the risk of disease, it’s worth noting that in most studies, palm oil is not the only contributor to the intake of saturated fats (red meat and dairy were also to blame).

As a result, most research papers conclude that there is no evidence so far of a clear association between palm oil consumption and risk of mortality, or cardiovascular diseases such as coronary heart disease and stroke.

In limited quantity, as part of an overall healthy diet, most experts believe that palm oil does not have bad repercussions on health. However, the environmental impact of producing the oil is undeniable. Consumers are encouraged to look for 'palm oil free' labels when next at the supermarket.