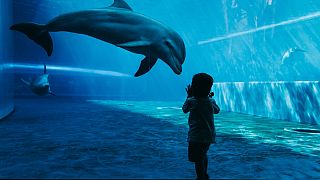 The ocean doesn't currently feature in the National Curriculum for primary school in England.   -   Copyright  Getty via Canva
By Marthe de Ferrer  •  Updated: 15/07/2020

Thousands of British students will see the ocean placed at the centre of their learning when they return to school in September.

Children on the UK’s south coast will be part of the nation’s first ever scheme to integrate the oceans into everyday teaching. The Ocean Conservation Trust (OCT) has developed the new curriculum in conjunction with five, trial primary schools in Plymouth from the Connect Academy Trust spearheading the initiative.

The ‘Connecting us with our Ocean’ project aims to foster a passion for marine conservation in the pupils. Instead of oceanic discussions being confined to the biology classroom, core subjects like literacy and maths will include marine themes, so students are fully immersed in the “context of conservation.”

“Despite the Ocean representing the largest living space on the planet and being essential to the survival of all of us,” explains Nicola Bridge, head of conservation education for the OCT, “it is notably missing from the current curriculum. The UK is a national and global leader in marine science, and Ocean-related teaching should be an essential part of the core curriculum.

“Getting a cross-curricular ocean-themed learning programme into schools will be a huge step in the right direction – not just for Ocean conservation, but for the blue economy too,” says Stu Higgs, schools programme manager for the OCT. Blue economy is a new term, meaning the sustainable use of oceans for economic growth.

“There are many STEM career opportunities related to the ocean and ensuring that school children are made aware of these from an early age will broaden their horizons when choosing a career path to follow later in life,” adds Higgs.

Is it time for a blue recovery?

In the wake of the coronavirus pandemic, many scientists and organisations are calling for governments around the world to prioritise a ‘green recovery’, which puts the environment at the heart of an economic recovery plan. Earlier this week, however, there were calls made for a ‘blue recovery’, where ocean conservation is made a core priority in any post-pandemic plans.

The report, from the High Level Panel for a Sustainable Ocean Economy, sets out the global economic benefits derived from ocean conservation efforts. Among the suggested proposals are things like ending overfishing, mangrove restoration, and an increased focus on offshore wind energy generation.

Earlier this month, a report found that the benefits of protecting 30 per cent of the planet would outweigh the costs five-to-one, but the forecasted economic gain from the suggestions in the sustainable ocean economy report are significantly greater.

Researchers estimate that the low costs of offshore wind farms would see investors make €15 back for every €1 they spend. Moves towards sustainable fishing would in theory generate ten times the original amount needed, leaving the global economy almost €6bn better off.

Instilling an understanding of marine conservation in schools from a young age could be vital in protecting the ocean long-term.

“The ocean provides half of the oxygen we breathe, drives the weather and climate and is a valuable food source for much of the world,” adds Bridge. “To look after it for future generations, we need to create an ocean-literate generation – that is to say, a generation that understands the ways in which we are all inextricably connected to it, just as it is to us.”