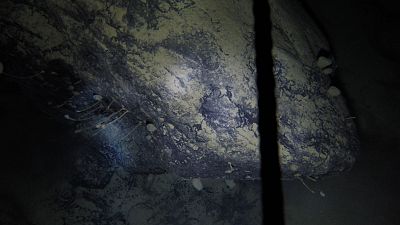 Marine life has been discovered under 900 metres of Antarctic ice shelf, much to the surprise of scientists.

Very few creatures have been found living in such extreme conditions and the discovery goes against all previous theories about what kind of life could survive there.

How did they 'accidentally’ discover marine life?

“We were expecting to retrieve a sediment core from under the ice shelf, so it came as a bit of a surprise when we hit the boulder and saw from the video footage that there were animals living on it,” says Dr James Smith, a biogeologist at BAS who was part of the drilling team.

The results of the research were published in Frontiers in Marine Science on Monday.

Accidental discovery of extreme life! Far underneath the ice shelves of the #Antarctic, there’s more life than expected: https://t.co/atdkiv1GrA

The drilling site was 260 kilometres away from open water, leaving scientists puzzled as to how these creatures have been obtaining enough food to survive. In conditions like this, that are so far away from sunlight, they would expect to find animals that move about and scavenge to survive - such as fish, worms or krill.

Described as a “fortunate accident”, this raises more questions than it answers including what would happen to these newly discovered communities if the ice shelf were to collapse, says lead author of the study, Dr Huw Griffiths.

Floating ice shelves are “the greatest unexplored habitat” in the Southern Ocean, according to the BAS. Although they cover 1.5 million square kilometres of the Antarctic, only an area the size of a tennis court has been studied so far.

But the window to study these previously unexplored ecosystems may be closing. Global warming is increasing the risk that Antarctic ice shelves - including Filchner-Ronne Ice Shelf where this marine life was found, will collapse into the sea.

In December, a giant chunk of ice the size of Luxembourg that broke away from the Larson C ice shelf put one of the world’s most important ecosystems in danger. Experts warned that as Antarctica gets warmer events like this could become more common.

That leaves the scientists with a challenge, to learn everything they can about these undiscovered ecosystems before they are gone forever.

“To answer our questions we will have to find a way of getting up close with these animals and their environment – and that’s under 900m of ice, 260 km away from the ships where our labs are,” adds Griffiths.

“This means that as polar scientists we are going to have to find new and innovative ways to study them and answer all the new questions we have.”