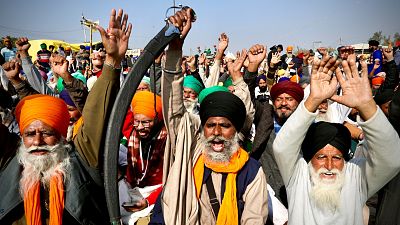 Activists, popstars and public figures have taken to Twitter in support of ongoing strikes by farmers in India.

Barbadian singer Rihanna shared an article to her more than 100 million followers on Tuesday, sparking others to speak out on the issue too.

In a matter of hours, climate activist Greta Thunberg had shown her support, along with Ugandan activist Vanessa Nakate and the US vice president's niece Meena Harris.

But what did the Indian government have to say?

why aren’t we talking about this?! #FarmersProtesthttps://t.co/obmIlXhK9S

India’s external affairs ministry responded to the call to action, accusing the singer of being “sensationalist”. It claimed that “reformist legislation” had now been passed and criticised her for causing a social media storm.

"The temptation of sensationalist social media hashtags and comments, especially when resorted to by celebrities and others, is neither accurate nor responsible.”

What’s going on in India?

The ‘Indian agriculture acts of 2020’, referred to as Farm Bills, are three acts initiated by the Parliament of India in September last year. Ever since they were approved, mass outrage has been sparked across the country, coming mainly from those in the agricultural sector.

Protestors claim the new laws are “anti-farmer” and put farmers at the “mercy of corporates”, alleging that it will hurt their incomes. Agriculture is the largest source of livelihood for most Indians, employing more than half the country’s workforce.

It’s been called the world's largest organised strike in human history. In November, protesters were being struck with water cannons and tear gas shells by the police forces, throwing stones themselves and tossing barricades into the river.

By December, tens of thousands marched in the capital city of New Delhi, with over 250 million people from around the subcontinent participating in a 24-hour strike in solidarity. This culminated in a violent breaching of barriers at the Red Fort in Delhi on 26 January, India’s Republic Day.

The government states that the three new laws will serve to help farmers, by removing taxes and other government-imposed financial burdens to help them sell produce directly to corporations.

The aim is also to encourage private investment in agriculture.

The three laws are as follows:

Farmers argue that the new laws prevent them from getting a guaranteed, ‘minimum support price’ (MSP) and will mean businesses can hoard produce.

They say it opens up markets for competition, meaning prices will no longer stay at a fair level. This leaves farmers open to being taken advantage of by big corporations - in turn causing pay rates to drop.

“Just like the big fish eat small fish, big businesses will eat us up now,” Rakesh Vyas, a farmer camping outside Delhi told the BBC.

Has the government responded?

The sheer force of the protests pressured Prime Minister Narendra Modi to take the Indian citizens seriously. This resulted in a breakthrough on 12th January, when the Supreme Court in India decided to temporarily suspend the legislation.

They hoped this would assuage protestors, but farmers unions maintained that they want the laws completely repealed - a demand firmly rejected by the government which only offered an amendment.

Now, they are back on the streets.

The farmers are demanding a full retraction of the laws and say they are willing to remain at the capital’s outskirts until this is fulfilled.

Why the farming protests are an environmental issue

Over 50 per cent of India’s population is directly or indirectly involved in agriculture, which is heavily impacted by the climate crisis.

Although the farmers’ demand for the MSP is not directly linked to environmental issues, the impacts of climate change are integral to it. Crops across India are routinely victim to issues including excess rain, no rain, heat, pests, hail, flood, drought and seawater inundation which affect the farmers’ earnings.

In 2019, Ramesh Chand, a member of India’s federal think tank, Niti Aayog, spoke at a conference, stating that agriculture is “central to climate change and clean air, and sustainable use of land and water.”

Climate fluctuations have heavily impacted agriculture over the past few years in this area of the world. Agriculture had a gross value addition (the value of the agricultural goods and services produced after deducting the cost of inputs and raw materials) of 16.5 per cent last year, according to the Economic Survey 2019-20.

Farming is not just an environmental issue, it’s a source of livelihood for many and an important contributor to our local economies. Changing its laws can have implications on national income, food security and survival for a significant section of a population.

“Agriculture is both part of the problem and part of the solution to climate change and sustainability. We must seize every opportunity to shift away from inefficient farm practices, towards long-term sustainability, efficiency and resilience. Among all sectors, agriculture offers the best hope for green growth that is environmentally sustainable,” added Chand.