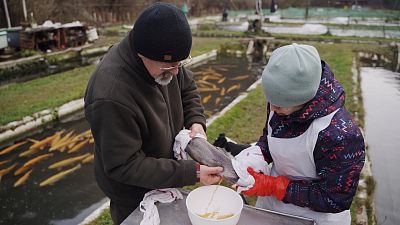 Kush Seafarms is Ireland's leading producer of organic shellfish. This family-run company in Kenmare Bay in the country's picturesque south-west started as a pastime in the early 1980s.

"This area is unique. It's chiselled out valleys from the time of the Ice Age, so you wind up with very deep water sheltered by mountains behind, which is ideal for suspended culture," explains managing director of Kush Seafarms, John Harrington.

The shellfish grow on ropes at a protected natural area, in crystal-clear waters rich in phytoplankton.

"Some people have the impression that, oh, if it's aquaculture, then it's not natural — and nothing could be farther from the truth," says Harrington.

"You don't add anything to the water, the phytoplankton is natural. Basically, because we have created a habitat for mussels, they are now eating phytoplankton that otherwise would be lost and would be useless."

Under European directives, the water is tested every month, confirming its "Class A" purity.

"You can take the mussels directly from the water, bring them home, put them in the pot and boil them. You don't need to purify them or do anything else to them. They are a natural clean product from clean waters," says Harrington.

Empty ropes are suspended underwater in June. Eighteen months later, the mussels are ready for harvesting. The company holds on to its roots: all the employees come from the local villages.

"What we do is we just cut it, take the tail of the rope, and bring it up the conveyor. And we throw off as many weeds as we can," says mussel farmer at Kush Seafarms, Finbarr Dwyer.

The farm reduces waste by using recyclable ropes and other biodegradable materials.

It also keeps its production volumes sustainable. The food market is increasingly environmentally-aware, and the organic certification is an important advantage.

"A kilo of mussels only produces 200 grams of CO2 compared to beef, which is 34kg of CO2. Millennials are looking very much towards low carbon food: I want to make a choice that helps the planet as well as helping my body," says Harrington.

The company sells its mussels in France, Italy, Spain, The Netherlands and Germany.

Among all European countries, Ireland is the leader in clean aquaculture, producing around 30 thousand tons of organically certified fish and shellfish every year.

The growth of this sector is supported by BIM, Ireland’s Seafood Development Agency, that works directly with local businesses. It helps with innovation, certification and skills training, using EU grant aid from the European Maritime and Fisheries Fund.

"You have this pristine environment where the product is grown, whether that is oysters, mussels or salmon. We don't just tell you that, we actually certify it," says Salmon and Shellfish Manager at BIM, Richard Donnelly.

"And the organic certification that we have for 100 per cent of our organic salmon, we have 70 per cent of our mussels certified. And these are the primary things, that we are a high value, low volume, niche product. And that when you taste our seafood, you're tasting something very different."

Despite being a landlocked country, Hungary produces as much organic seafood as France or Denmark.

Lillafüred, a famous tourist resort in pristine mountains of the country's north-east, is home to Hungary's oldest pond aquaculture facility running since the 1930s, a trout breeding farm managed by György Hoisty's family.

"I came here as a fishery engineer at the Lillafüred Trout Plant in 1982, so I've been running this small facility for 38 years, first as a state employee, and then, in 1991, we rented this farm and managed it independently ever since," says manager of Lillafüred Trout Farm, György Hoisty.

At first, György and his wife had to do all the work, but over the years, they hired more employees and increased the production by 40 percent, while making their business more sustainable.

"Currently, the plant produces 60 tons of fish, of which 60-65 percent are sold or processed here, 20 to 25 percent goes to other restaurants in the area, and 10-12 percent are released to restock fishing sites," says Hoisty.

With local karst springs increasingly drying out, this farm became one of the first in Hungary to build a recirculation system. It biologically purifies the water, enriching it with oxygen.

"In drought years, unfortunately, the production was falling sharply. The springs couldn't provide enough water with sufficient oxygen for the fish," says Hoisty.

"So we developed a recirculation system to secure and increase our production. Now the water that flows back to our fish is almost of drinking quality, so the natural flavour of the fish meat is maintained, it does not acquire the taste of the lake or the algae."

Lillafüred Trout Farm's sustainable and self-reliant approach allows it to run a complete cycle of operations.

It breeds and sells trout in all development stages, starting from fish eggs. But its main product is market-sized trout; freshly caught and cold-smoked at the farm's own processing facility or cooked at its popular restaurant: even during the COVID crisis, it kept working, offering deliveries and takeaway meals.

"There's not much of difference between farmed fish and wild-caught fish in terms of taste. Farmed fish might be a bit fattier, but it's grown in a much safer environment, regularly checked, so there is no risk of some unexpected disease," says Marcell Boros, chef at Vendéglő a Pisztrángoshoz restaurant.

"And the guests trust us. They know that this fish farm has a long tradition, and they can be sure they're getting the best quality fish on their table."

With public demand for fresh, healthy and tasty fish growing, the Hungarian farm is considering further expansion: it estimates that thanks to the recirculation system it can once again double its production while keeping it sustainable and clean.