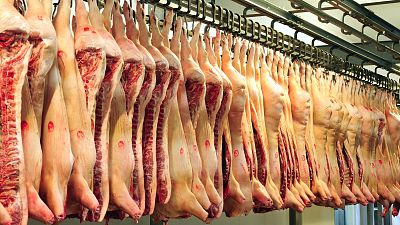 Danish researchers are turning pigs’ blood into a source of protein powder to be added to food.

It might not sound too appetising at first glance, but a team at the University of Copenhagen thinks it could act as a sustainable source of protein for humans.

Currently, 60,000 tons of pig's blood is left over from pork production in Denmark and the majority is sold on the international market for animal feed. But due to its high nutritional value, at 90 per cent protein, scientists say it could be used as a supplement in a wide variety of foods instead.

The protein powder the team has produced is white and neutral tasting, so it wouldn’t change the flavour of any product it was added to. 5,000 tonnes of pure protein powder can be extracted from 60,000 tonnes of blood, through a method which uses papaya fruit. Papaya possesses an enzyme which can extract protein from the blood, while also separating out the iron, which could then be used in dietary supplements.

"We are increasing production sustainability by taking advantage of pig blood as a protein source for human consumption. It is likely that a growing number of people will satisfy their protein needs in the future through alternative food sources, for the sake of CO2 emissions and due to food shortages," explains Associate Professor and head researcher Rene Lametsch.

Lametsch claims that the protein powder could be used in many foods and drinks, such as blending it into juice, ice cream or chocolate bars. It could even be used to help the elderly get enough nutrients when they have to go into hospitals or care homes.

"We have tested the powder in a chocolate bar, as well as in meatballs served to people 65-years-old and up, with positive results. Older people can have a tough time getting enough protein in their diets as they begin to eat less at the exact same time that their bodies need additional protein," he says.

What do animal rights groups think?

Despite the numerous potential uses for the pigs blood protein, animal rights organisations like PETA are appalled by the news.

The nonprofit exists to call out the use of animals in the food industry, as well as in the clothing trade, in laboratories and in the entertainment industry. They believe it is unethical to consume animals or animal products in any form, as the creatures will no doubt endure suffering as a result.

“We don't need to develop new ways to exploit every last limb, bone, and drop of blood from pigs and other animals,” she begins. “What we need is to shift away from animal agriculture – one of the most significant contributors to climate change and the cause of tremendous suffering and pain for billions of gentle, intelligent animals every year.

“There's no reason to consume animal flesh or fluids, and the best – and kindest – way to create a sustainable, green future is to leave pigs and all other animals off our plates.”

At any rate, it doesn’t look like the protein will be available to buy any time soon. Currently, the Danish team still needs investment in order to roll out their plans, which they claim have the potential to both reduce meat production and help the environment.

"A bold industrial investor must be willing to test this with consumers," says Lametsch. “Protein from pig’s blood faces the same challenge as with insects. People try it, and think of it as exciting, but it takes time to get used to."

He suggests that China may be interested, as the country is already a prime export market for Danish pork.