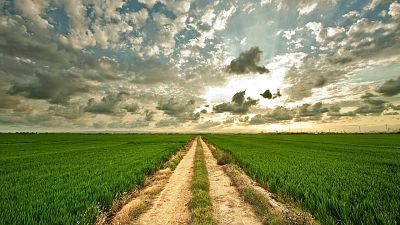 Eating plant-based foods like beans and lentils is better for the environment than consuming meat.   -   Copyright  Getty via Canva
By Maeve Campbell  •  Updated: 08/09/2020

A new study has found that switching to plant-based foods such as lentils, beans and nuts could help to “drastically” reduce the effects of years of carbon emissions on the climate.

The research, published in the journal Nature Sustainability, highlights why our demand for meat is so bad for the environment. It suggests that the alternative, increased vegetation regrowth and relying on a plant-based diet, could remove between 9 and 16 years of global fossil fuel CO2 emissions.

The amount of space needed to grow animal-sourced food makes up 83 per cent of the earth’s agricultural land. So the sheer amount of land needed to both rear and feed animals, means that native vegetation is suppressed and ecosystems cannot flourish. By stark contrast, growing plant protein food like lentils and beans can provide us with vital nutrients, using a small fraction of the land required to produce meat and dairy.

The study looks at places where changing what people grow and eat could free up space for ecosystems to regenerate, offsetting CO2 emissions in the process. If demand for meat were to plummet in the coming years, that amount of CO2 removal would effectively double Earth’s rapidly shrinking carbon budget, the research claims.

Where would reducing meat consumption have the biggest impact?

“The greatest potential for forest regrowth, and the climate benefits it entails, exists in high and upper-middle income countries, places where scaling back on land-hungry meat and dairy would have relatively minor impacts on food security,” says Matthew Hayek, principal author of the study and assistant professor at New York University’s Department of Environmental Studies.

“We can think of shifting our eating habits toward land-friendly diets as a supplement to shifting energy, rather than a substitute,” Hayek continues.

“Restoring native forests could buy some much-needed time for countries to transition their energy grids to renewable, fossil-free infrastructure.”

Nathan Mueller, a co-author of the study, describes the potential for restoring the earth’s ecosystems as “substantial”, adding, “land use is all about tradeoffs”.

While acknowledging the economic benefits of animal agriculture in many regions around the world, he concludes that the study’s findings can “help target places where restoring ecosystems and halting ongoing deforestation would have the largest carbon benefits.”