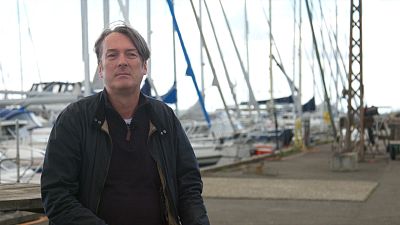 In this week's episode of Ocean, Euronews' Denis Loctier explores how this is impacting those who rely on fishing the species - and the reasons behind its decline.

In the 1990s and early 2000s, cod in the Baltic and the North Sea appeared to have been saved from decline following a series of measures, including reduced fishing.

However, despite low fishing pressure, the cod stock has gone down again, in what scientists have described as a "massive reproductive failure".

Why does cod in European seas continue to decline, and could climate change be playing a part?

Dr Stefan Neuenfeldt, a senior researcher at the National Institute of Aquatic Resources, section for Oceans and Arctic, explained to Euronews:

"We cannot really answer the question - why it is collapsing - mechanistically. But what we can see is there are several things happening in parallel, so we can correlate them. One thing we can see, for example, is that the southern North Sea is warming pretty much - you know, all these scenarios of global warming, two degrees within one hundred years - they're on a very, very wide spatial scale. Actually, when you focus down on the regional scale, especially in the shallow areas like the North Sea or also the Baltic, which only has an average depth of 55 metres, warming goes much faster," Stefan Neuenfeldt said.

"We can say that with this increased temperature, the whole ecosystem is changing. The timing of the algal blooming, and then the timing of the small critters that swim in the water, which are the food for the larvae cod, has changed. And we're not sure any longer if the match and mismatch between food for the larvae and these blooms still is so much in tune that they actually work together. So there might have been a decoupling.

"In the Baltic Sea, we have had a period of hypoxia, which is when the water seabed gets black because there's no oxygen left. And so all the creatures that were living on the seabed and which are the food for the cod - they have been drastically reduced.

"Fishing pressure certainly has been a factor. I am not sure if it still is a factor. It is very difficult to disentangle the effects of fishing and the effects of environmental change. And very often they're working together. The general paradigm is that what is most important for the reproduction of this stock is the biomass of fishes that can lay eggs, the so-called spawning stock biomass. What we can regulate is this biomass. Everything that happens afterwards is out of our hands,” he added.

A ban on cod fishing leaves fishermen worried for their future