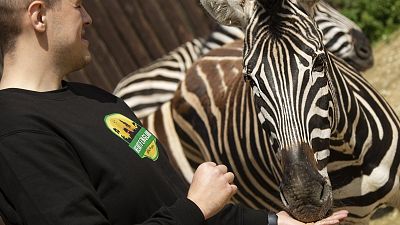 Martin Blyth says he is fulfilling a dream he has had since he was four years old.   -   Copyright  Heart of England Wildlife Park
By Marthe de Ferrer  •  Updated: 24/08/2020

A British man has sold his home and abandoned a well-paying job to create a zoo without bars.

Martin Blyth is the director of the Heart of England Wildlife Park, based in Worcestershire. The 28-year-old left his job as a teacher at a private school and put his house on the market to fund the park’s creation. This project, he says, is fulfilling a dream he has had “ever since he was four years old.”

According to Blyth, the zoo will be home to around 300 animals, but there will be no bars to keep the creatures penned in.

It won’t be a traditional safari park, however, where cars can drive through large-scale animal enclosures. Instead, it will be a “walk-through safari”, designed in such a way that both animals and visitors are safe.

The site is planned to be 30 acres (12.14ha), with a visitor centre and multiple educational programmes. Blyth’s intention is for the park to be dedicated to conservation, “safeguarding endangered wildlife species from the threat of extinction in the wild,” he explains.

Visitors are expected to be welcomed to the Heart of England Wildlife Park by Easter 2021, for the first phase of the project. Blyth says his initial animal selection will include zebra, meerkats, pelicans, and lemurs - but his aim is to have 50 different species in total, including lions and tigers.

Connected with the region

The park’s attraction will likely be rooted in its surroundings, paying homage to Worcestershire’s cultural and historical roots.

“I not only care passionately about education and wildlife conservation,” explains Blyth, “but I am incredibly fond of my local area and believe Heart of England Wildlife Park is exactly the sort of attraction that is needed to boost economic growth and employment within the region.

“We’ve already had some really encouraging meetings with the local council and they clearly share our vision for establishing a world class attraction which residents can be proud of. The Park will not only exhibit wildlife but also celebrate the cultural, agricultural and historical roots evidenced throughout this unique area of the country.”

In exchange for donations, supporters will be given a voice in the zoo’s creation - from voting for which species to house and naming the new animals, to giving input on the park’s management. Blyth wants the process to be democratic and reflect the opinions of his supporters.

Donors won’t own any shares in the zoo, but Blyth hopes that they will enjoy being able to “make a meaningful difference” to the project and the conservation of endangered wildlife species.