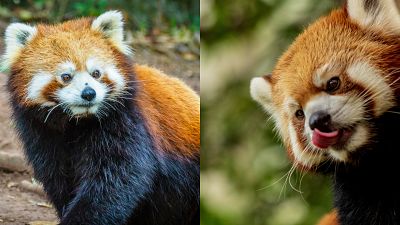 It's not every day you can sit down to breakfast with some adorable red pandas. But with many of us stuck inside during lockdown, one British zoo came up with the idea of hosting a virtual zoo day to cheer everyone up.

Chester Zoo is in Cheshire, England and is the spot conservationists chose to livestream a group of red pandas enjoying themselves in the trees. It was all to raise awareness of the furry species, who are listed as vulnerable to extinction by the International Union for the Conservation of Nature’s (IUCN) red list of threatened species.

Although it is estimated around 10,000 red pandas remain, the Red Panda Network says there may only be 2,500 left in the wild. Chester Zoo conservationists say the population has seen a 40 per cent decline in just 50 years.

The zoo is part of a Europe-wide breeding programme for the species. Luckily, so far, the current pandemic "has not been affecting this programme, as all good progressive zoos are continuing to care for their animals as normal", assistant PR Manager of the zoo, John Brown, tells Euronews Living. The zoo was lucky enough to have two cubs born last June, the rare twins were named Huo Hu, meaning ‘Firefox’, and Tiang Tang, meaning ‘Heaven’.

There is a lot people don't know about red pandas, for example, the breed is so unique that taxonomists even created a new mammal family for the species, the Ailuridae. They are the original panda species, having been discovered around 50 years before the giant panda. Even the name 'panda' was originally created for just them. They are mostly vegetarian, with a diet that is 98 per cent bamboo.

Red pandas spend most of their time in trees, and more than half of each day sleeping. When it gets really cold, red pandas wrap their tails around themselves and go into a deep sleep, reducing their metabolic demands and lowering both their core temperature and respiration rate.

Their natural habitat is in the mountainous regions of Nepal, India, Bhutan, Myanmar and southern China, where habitat loss, illegal wildlife trade and poaching are threatening their existence.

Click on the video above to see how red pandas enjoy their breakfast at Chester Zoo.