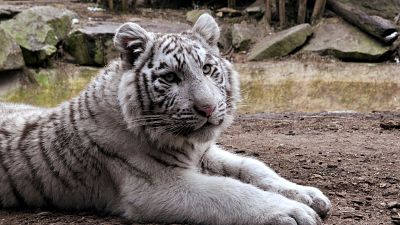 Two white Bengal tigers have arrived at Bulgaria’s Sofia Zoo from Győr in Hungary. The cubs are brother and sister, one year and seven months old respectively, and are very rare in the wild.

Sofia Zoo has been closed for the last two months due to coronavirus but recently reopened, welcoming visitors who want to catch a glimpse of its newest residents.

Despite being such young cubs, the white tigers, named Kiafa and Narcissus are already nearly full sized. They both weigh around 150 kg but Kiafa, the male, could reach up to 200 kg as an adult. The siblings have a lot in common, with light brown stripes and piercing blue eyes. But the female is observed as being more “timid and mistrustful”, while the male is “braver and more socialized”, according to the conservation team at Sofia Zoo.

The white tiger is simply a pigmentation variant of the Bengal tiger and is very rare in the wild. The species find it “difficult to survive in natural conditions due to their atypical color, which makes them easily noticeable and prevents them from hunting,” says the zoo.

Tiger conservation, from protecting habitats to zoo breeding programmes, is recognised by organisations like the WWF to be the best way to protect the species from dying out. At Sofia Zoo, they are safe and well fed. “It’s so easy to feed them, they like the food we are offering them,” chief keeper Radko Sertov told Reuters. “They eat meat, mainly chicken, beef or horse meat. They also eat some fish once a week.”

The pair will live somewhere between 10 and 25 years if properly cared for.

Tigers are an endangered species

Tigers are listed as ‘Endangered’ on the International Union for the Conservation of Nature (IUCN) Red List of Threatened Species, with the Bengal tiger listed as particularly vulnerable.

A century ago, there were as many as 100,000 wild tigers living in Asia. Today, fewer than 3,900 are left, according to the UN’s World Wildlife Day fact-sheet. Not only are wild tigers hunted to meet the demands of the $20 billion a year illegal wildlife market, they are killed by villagers to protect livestock and communities.

Bengal tigers tend to live in tropical and subtropical forests in countries like India, Nepal, Bhutan and Bangladesh. Their habitats are increasingly under threat due to agricultural developments, namely palm oil plantations which result in deforestation.

A Tiger Summit was held in St Petersburg, Russia, in November 2010. There, the 13 tiger range countries (including Vietnam, Myanmar, Malaysia, Indonesia, China, Russia, India, Thailand and Laos) made commitments to launch a Global Tiger Recovery Program. The aim was to double the number of wild tigers by 2022.

According to the UN, the future of tiger ranges depends upon the Asian governments “creating effective tiger landscapes by conserving large areas of suitable habitat.”