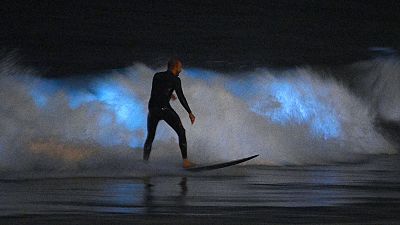 Glowing waves have been lighting up the coast in California, US, with surfers relishing the rare opportunity to ride the bright blue tide.

The natural phenomenon is a result of a ‘phytoplankton bloom’ which has been going on since March of this year. A bloom means that the tiny organisms are growing very quickly over a short period of time due to perfect growing conditions. During the day the algae rise to the surface to capture sunlight, with millions of the microscopic organisms present in every litre of seawater.

The phytoplankton has a brownish colour and, when so many are present, is referred to as a ‘red tide’. But once night falls, they begin to glow blue when agitated. As restrictions on beach access are lifted, people have been coming in droves to surf and swim in the luminous waves.

This is the largest bloom in a decade with the highest number of phytoplankton ever recorded, according to the Southern California Coastal Ocean Observing Service (SCCOOS). Usually, these events only last one to two weeks but the current bloom in California has been going on for over a month.

What causes a ‘red tide’?

Algal blooms (red tides) can occur due to increased nutrients that cause the organisms to begin reproducing rapidly. Some blooms create toxins that are harmful to fish and small animals. This can then be passed up the food chain to impact larger animals that feed on them like turtles, dolphins and birds.

Although they have been happening for thousands of years, scientists have become concerned that the number of blooms occurring each year has increased. The question of their ultimate cause is disputed, but toxic blooms, in particular, have been occurring in parts of the world where they haven’t previously been seen before. It could be due to human activity, particularly runoff from fertilisers used in agriculture. However, much more research is needed to understand exactly why, says the Scripps Institution of Oceanography which studies these events.

Are the glowing waves bad for marine life?

California’s glowing phytoplankton population are not toxic and are usually a result of nutrient-rich water being brought up from the bottom of the ocean and warmer seas. The region has been experiencing a “prolonged marine heatwave” since 2015 with unusually warm ocean surface temperatures, which may have contributed to the unprecedented number of the bright blue organisms, says the SCCOOS.

As the base of the ocean’s food web, they feed zooplankton like krill and small fish which then go on to support everything from sea lions to whales. This makes the glowing phytoplankton an essential part of the ocean’s ecosystem.