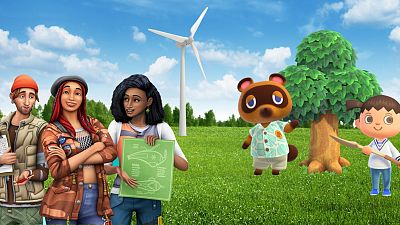 Cult classic video game The Sims has revealed that its next expansion pack is sustainability themed. The ‘Eco Lifestyle’ addition is set to be released in June for The Sims 4 players on Xbox, Playstation and online.

While the world is still mostly under lockdown, players can now live out their environmental dreams in the game as they work to clean up their neighbourhoods and upcycle their belongings. The new pack also has sustainable living options, so characters can produce their own power and water through wind turbines and solar panels.

‘Freegans’ or fans of dumpster diving may also be pleased to see that you can now delve into waste bins to scrounge for food or furniture. And for anyone keen to take part in more political environmentalism, there’s an option to campaign and work on community projects to effect change within the game.

Characters can produce their own power and water through wind turbines and solar panels.

Players of course have the option to turn this all upside down, by building trash piles and allowing pollution to cause smoggy skies across their neighbourhoods. For those set on causing mayhem and mischief within the Sims world, this can be a fun experiment to see what happens (just don’t try it in real life!).

Some fans of the game have criticised the new release, branding it as an attempt to “profit off an actual global crisis” as none of the proceeds from previous eco expansions have been used to support climate change charities or campaigns.

However, other Twitter users are praising the team behind The Sims for incorporating environmental storytelling into such a popular game.

The Sims 4 isn’t the only popular video game to put nature at the forefront of gameplay. At the end of March, just as much of Europe entered lockdown, Animal Crossing: New Horizons was released on Nintendo Switch.

There’s no aim or purpose to Animal Crossing; players enter a deserted island and are free to fish, catch bugs, chop trees, or look for fossils freely. In April, there was even a special celebration of Earth Day, with characters encouraged to do ‘green activities’ like watering flowers and planting trees. Some were sceptical, calling the nature day celebration a “farce”, but the game still remains popular.

Animal Crossing now has over 11 million players worldwide. Hashtags and comments about the game are often trending on social media as even Hollywood A-Listers like Elijah Wood are crafting their own bespoke islands.

The Guardian’s video game editor Keza MacDonald said that Animal Crossing “offers the comfort of a carefree existence in nature,” which has proved particularly appealing during the coronavirus pandemic. Even one of the game’s creators, Aya Nyogoku, told the newspaper that nature has been specifically considered within the new Animal Crossing launch because of “this new value it brings.”

But games like The Sims and Animal Crossing have come under fire from academics and campaign groups alike for promoting damaging behaviour.

Linguistics specialist Dr Robert Poole has examined a previous version of Animal Crossing (New Leaf, released in 2012) through an ecolinguistics lens. Dr Poole found that while these games have the potential to “cultivate more ecologically sustainable” practices, in reality the gameplay actually “perpetuated the production and performance of identities and human-nature relationships at the root of the ecological crisis.”

PETA has even produced a ‘**vegan guide**’ to Animal Crossings: New Horizons, guiding players on how to enjoy the game without damaging the (granted - digital) ecosystem.

“The premise of Animal Crossing: New Horizons should send the important message that other animals are individuals with whom we share the world—not objects for us to exploit,” says the PETA guide.