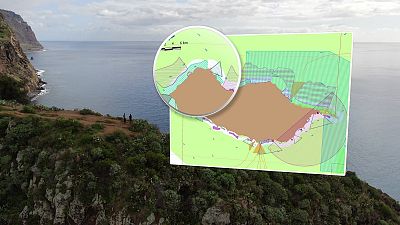 An ambitious project to improve the management of marine resources across regional and international borders is underway in Europe and all over the world.

So-called Maritime Spatial Planning is designed to help governments and stakeholders alike decide what is best for their coastlines, boosting the marine economy while preserving the coastal ecosystems for generations to come.

The Azores, Madeira and the Canary Islands are all benefiting from the EU-funded "MarSP" project, which is helping the islands with their planning.

"There are new uses that are appearing from the combination of various activities that can interact and share the same space in a sustainable way. And the maritime spatial planning allows us to make these marine activities compatible."

At the University of the Azores, planners combine survey responses from those who use the sea with existing data on marine resources and habitats in a geographic information system, or GIS.

“We’ve asked them please draw the polygon where you practise your activity, what are the other activities that you are in conflict with and why. Then we take this information and we input it into a GIS system to support decision-making."

The plans take all factors into account — from depth levels and coastal land use to cultural artefacts and, most importantly, the ecosystems. Sea resources can only be used in ways that preserve biodiversity, keeping marine plants and animals healthy.

The Azores are famous for whale watching, attracting tens of thousands of tourists a year. The influx of so many whale-watching boats has the potential to create problems for the local fishing industry.

But Laura González García, head biologist of Portuguese tour company Futurismo, says there has been more cooperation than conflict.

She told Ocean: “Dolphins are feeding around the fishing boats, and the fishermen right now are telling us, ‘hey, you have the dolphins here!’ It’s a kind of collaboration even.”

Madeira finalised its plans ahead of the other Macaronesian archipelagos by resolving a conflict between its growing aquaculture business and its crucial tourism sector.

Surfers had complained about fish farms spoiling their waves, so the planners moved them to a better spot, where they unexpectedly became a magnet for scuba divers.

As for pollution concerns, the authorities are planning regular inspections.

Carlos Andrade, Head of the Marine Aquaculture Division at Madeira’s Fisheries Directorate, told Ocean: “The areas would be kept pristine, and for that we had to obviously implement the monitoring programs for it.”

Most of the coastal waters to the north of Madeira's main island are protected areas for marine mammals — off-limits to economic activities.

Fish farms have been assigned to relatively small areas on the other side of the island — but with enough space to grow.

For the aquaculture companies, this certainty is important — they’ve doubled their production over the past year, and are on track to double it again.

Pedro Diniz, who manages a fish farm off Madeira, said: "For us it's confidence that we have a space for certain time. We won’t be forced to leave this place, as this is a very good spot."

The maritime spatial plans span from the shoreline to the outer limits of the regional and national maritime zones.

They will be updated every few years to include new business opportunities, such as offshore wind farms.

Manuel Ara Oliveira, Madeira’s environmental and climate change director, said: "The fact that our plan is ready means that we can start working on reviewing it with more knowledge, more capacity, more sharing and more cooperation with the neighbouring archipelagos — the Canaries and the Azores."

Finding compromise solutions with neighbours is not always easy so the European Commission and the Intergovernmental Oceanographic Commission of UNESCO have set up MSPGlobal — an initiative to promote maritime spatial planning worldwide, sharing the experience between Europe and other regions.

It’s the kind of problem Maritime Spatial Planners need to solve — especially in areas such as northern Europe, where there is intensive use of limited marine space.

Alejandro Iglesias Campos, a program specialist with UNESCO’s Intergovernmental Oceanographic Commission, told Ocean: "All activities that are across borders — maritime transportation, tourism, but also biodiversity, all marine protected areas — the challenge here will be how to manage these different activities, across borders, in a sustainable way."

Las Canteras beach in Las Palmas de Gran Canaria is both a marine reserve and a tourist hotspot for snorkelers and divers - an example of how such planning has combined sustainable economic growth with preservation of nature.

Meanwhile an EU-funded project, PLASMAR, is developing a decision-support system to better protect nature and optimise the use of marine space.

It shows how suitable a certain area is for a given sector, based on its oceanography, maritime activities, coastal land use, conservation needs and other factors.

Trials are already underway at the PLOCAN test site in Gran Canaria. Researchers are convinced that turbines at sea don't have to get in the way of other sectors.

José Joaquín Hernández-Brito, chief executive of Oceanic Platform of the Canary Islands, said: "We’re working in projects in such a way that the fisheries can do their work inside, between the space within turbines, or even putting aquaculture in the middle — so the question is to develop the technologies."

The EU coastal member states have until the end of March 2021 to finalise their maritime spatial plans.

The importance of restoring marine biodiversity