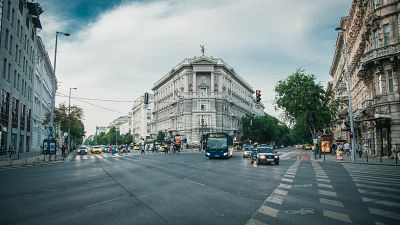 European cities are starting to make headway in green technological initiatives and are transforming urban spaces to reduce carbon emissions. But which cities are making a difference and what are they doing to make mobility greener?

As part of Rzeszów's commitment to investing in renewable technology, the Polish city will be implementing 140 new eco-friendly bus shelters and reducing CO2 emissions with electric buses by the end of September this year. The city's new smart bus shelters do not just provide you with a bench and shelter from the weather, they also have solar panels that are continually working to absorb the sun's energy. What's more, the director of the digital municipal infrastructure division at Asseco Data Systems, Paweł Sokołowski, tells us about the main station itself:

"[It is] covered with photovoltaic cells – on the façades, shelters and even the blinds. The air-conditioning system automatically adjusts to the weather outside. As a result, the station is a zero-emission and energy self-sufficient structure."

This green urban improvement is contributing to the city's aim of becoming a 'smart city' - a lot of European cities could learn from this technological initiative!

London’s first hydrogen powered buses to be introduced by 2020

By 2020, London will be putting the world's first hydrogen-powered double decker buses on its streets in light of the capital's commitment to becoming an ultra-low emission zone. The 20 buses that have initially been bought by TFL (Transport for London) will run on green hydrogen and will only have water exhaust emissions. This initiative aims to tackle the capital's problem with polluted air.

The German city of Ruesselsheim plans to build 1,300 charging points for electric cars by 2020, as a result of the growing popularity of this greener way of road travel.

Between 2015 and 2018, the number of electric cars in Germany increased by five times, but the ratio of charging points to electric cars did not increase. So this is certainly positive news!

Copenhagen to switch from diesel buses to electric

Known for its biking culture, Copenhagen is going one step further to improve its air quality and to reduce carbon emissions. The Danish city is encouraging greener forms of mobility by switching from diesel buses to electric, when bus contracts expire this year.

The aim is to start making public buses carbon neutral by 2025.