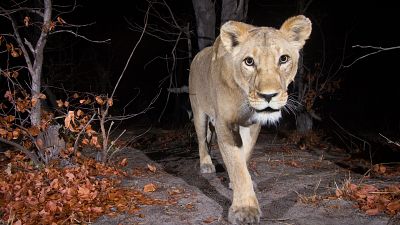 A simple device, just a heat and movement sensor attached to digital camera, has revolutionised the way that conservationists learn about animals in the wild.

Camera traps are a very simple solution to the task of working out when, where and how wildlife interacts with its environment. Monitoring populations without damaging habitats, these relatively simple devices have provided some astonishing finds including revealing species previously hidden in the untouched depths of the forest. Elusive new creatures aren’t their only speciality, however, as in 2015, similar devices helped reveal that the critically endangered Javan rhinoceros was breeding and significantly adding to its tiny population.

After identifying a likely area for a sighting, usually with the help of local guides, traps are placed at animal height on trees and posts and left to wait until wildlife walks by. A memory card stores the images for conservationists to fetch with these cameras often being deployed for months at a time and collecting hundreds of thousands of images with invaluable information about biodiversity.

And herein lies the problem. Whilst the traps have allowed millions of photographs worth of data to be amassed, the time it takes to weed out empty frames and label the species that cross their lens is astronomical. The delay in processing data can mean that vital information about biodiversity could be out of date before it can be used.

Tanya Birch of Google Earth Outreach and Jorge Ahumada from Conservation International explain in a blog post that, while a highly trained human being can label somewhere between 300 and 1000 of these images in an hour, new AI technology could analyze 3.6 million. Despite the challenging task of identifying species, Wildlife Insights is pretty accurate as well. Looking at data from the 614 species it has currently been trained on, the chance that it will guess correctly is over 80%. Perhaps, more importantly, the AI system is very good at removing camera trap images that feature no animals at all which can be up to 80% of the images taken.

This rapid computer analysis would make camera trap data available in “near real-time” removing the delay in processing that can make performing even basic research an incredibly slow process. Speed is vital in conservation to allow scientists and officials to react to ecological changes and rapid environmental disruption. Making this wealth of information rapidly available will help to support those attempting to save critically endangered species and their habitats.

Machine learning in the Colombian Rainforest

Google has highlighted the story of scientists in Columbia who, after the demobilization of the FARC in 2017, have been gradually rediscovering parts of the Amazon that they could not enter during the conflict in the region. The short film shows how field biologist Angélica Diaz-Pulido of the Instituto Humbolt is using camera traps to monitor umbrella species like the Jaguar in the forest that skirts the unique Rainbow River region.

“The challenges we biodiversity researchers currently face are focused on carrying out research quickly and ensuring it gets to decision-makers in time,” Diaz-Pulido explains in the short film. Threats to forests in this region are looming and intervention needs data to be processed rapidly so that recommendations can be passed on to the Minister of Environment. Leaving camera traps for just one month, however, can generate nearly 150,000 images which would take the Instituto Humbolt’s researchers up to a year to sort through.

Machine learning helps to speed up the processing of this massive amount of data so that the scientists on the raw edge of this impending mass extinction can use the most recent biodiversity figures to inform policymaking. This speedy analysis could help save species on the brink of extinction by getting the news of their decline out there before the images before irrelevant.

The launch of Wildlife Insights not only revolutionises the use of camera trap data by scientists but also allows open access to 4.5 million photos that date back to 1990. Ahumada hopes that the platform will help close the gap between the revolution that technology has brought about it allowing this data to be captured and our inability to use it. "AI can dramatically increase the speed at which camera traps can be processed and analyzed," he told euronews Living, "this will allow people to quickly assess wildlife populations from camera trap data and focus on actions that can help save and manage these species."

By making the data accessible Ahmuda hopes that everyone from managers of anti-poaching programmes to governments to children will use the wealth of images to identify wildlife in their area and grow the database. “We want citizen scientists, teachers and children to use the platform,” he says, “These are the future generations who will benefit from wildlife conservation.”

Using AI to process camera trap technology is by no means a new idea. Recently DeepMind detailed their work with Tanzania’s Serengeti National Park which will see the technology used to identify behaviours impacted by encroaching human activity in the area. As with many other projects, previously processing the millions of images collected by the team relied on volunteers using Zooniverse, a site where people help citizen scientists by identifying and counting species.