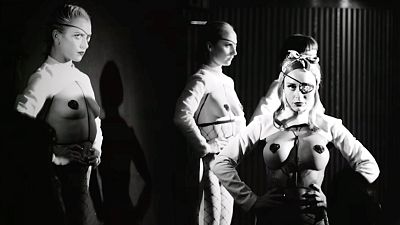 House of Kittens' Amatory Asylum performance is on at The Wellington in October and November
By Rachel Graham  •  Updated: 04/11/2019

Featuring a cast of 10 dancers, the show is inspired by shadowbanning – when platforms deliberately hide content published certain groups, in this case those working in the sex industry. With 90 minutes of titillation to the soundtrack of Quentin Tarantino’s pulp noir hit Pulp Fiction, it explores the expression of kinks and fetishes.

The production is heavily inspired by the Victorian age apothecary paraphernalia it features as props in the group’s most narrative performance yet. La Fleur stars in the show, in addition to self-producing the whole experience, which includes a drag ball and after party DJed by Sandy Rivera.

“Every so often, someone comes along to say it’s not feminist or liberating,” says La Fleur. “But our primary audience is women, and the vast majority respond well.”

“It’s not for everyone,” she concedes. “But we do have a very diverse and inclusive audience: men, women, the LGBT community have been huge advocates for us and then there are people into kink, vanilla and some just theatre heads.”

“We’d do more nude shows if we could, but most places aren’t licensed for it. We’ve done shows in Europe, and nudity is more acceptable there, people are much more comfortable with their bodies.”

This hasn’t always been House of Kittens’ mission. The group started off in costuming, then moved into choreography and private shows before accepting a residency and performing their immersive shows every Tuesday night.

What is immersive theatre?

Immersive theatre sees the audience play an active role in the production, from a small role as a witness to getting involved in plot points that could change the course of the performance. “It lets you step away from reality for a moment,” as La Fleur puts it.

Treading a line between immersive theatre – in which the audience plays an active role in the production – and burlesque, the House of Kittens are heavily influenced by Paris’ Crazy Horse Cabaret in addition to cult films, high fashion, musical icons, and underground art

“To me personally, burlesque is an homage to something that has previously happened. I expect to see a martini glass or feathers,” says La Fleur.

“Burlesque tends to distance itself from strip tease, which is something we don’t do. There’s an awful lot of stripping in our performances.”

Ultimately, with Lili La Fleur at the helm, the House of Kittens is determined to create an inclusive atmosphere for women to express their sexuality through performance.

Get tickets to see the Amatory Asylum production on at The Wellington here.