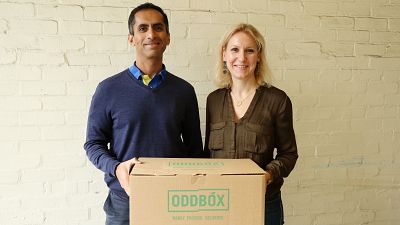 Emilie Vanpoperinghe and Deepak Ravindran had very different lives a few years ago.

She’d moved from her native France to India, where she met Deepak at work. In the 13 years since they met, they have gone from colleagues, to Londoners, to husband and wife, and most recently, business partners at wonky veg delivery service Oddbox.

Before Oddbox, they both worked in finance. Deepak in investment banking technology, while Emilie was the finance and operations director for a charity aiming to empower adults and girls in developing countries.

Read more | My eco job: I run a coral nursery in the Maldives

“I quit my career because I didn't want to work in a duplicitous society and I wanted to focus on a project of my own and Emilie wanted to work on a social mission,” says Deepak.

“That’s how we came across the issue of food waste. The thought triggered when we went to Portugal, when we saw the street markets in Portugal where you can see ugly looking fruits but they taste far better than they taste in the UK.”

The hunch that they were onto something was confirmed when they came across a successful campaign by French supermarket Intermarché promoting imperfect-looking fruit and veg. With their eyes opened, they heard more from food waste campaigner and celebrity chef Hugh Fearnley-Whittingstall and started speaking to growers, supermarkets and buyers to find out the scale of the UK’s food waste issue.

Fruit and veg are the foodstuffs most likely to go to waste in people's homes, according to WRAP. While supermarkets are doing their best to cut down on waste, with initiatives like taking best before dates off fresh produce, Emilie and Deepak still found the UK had just as big a food waste problem as there is across the western world. Being based in the UK, they decided to try to make a difference locally by making wonky veg boxes available.

They named the fledgling business Tasty Misfits. It took a different tack to the likes of City Harvest and Fareshare, by sourcing produce direct from suppliers and selling it on rather than donating it.

“Initially we started really small with a small trial in Balham,” Emilie tells Euronews Living. “We did a bit of flyering, we were posting on social media to find our first customers and we were only working with two suppliers.”

At this point, Deepak was focusing his attentions on the produce business but Emilie was still working. The pair packed boxes of veg together early on Saturday mornings, then delivered them all before midday.

“During the first three months we were operating out of a local church because we didn't have the money yet to get a warehouse,” Deepak adds.

“We were giving them food in exchange for space in the church where we could store the fruits and veg overnight and pack boxes in the morning. Emilie and I were delivering the boxes from 7am and at the time we could only fit 20 boxes on our car.”

However, they ran into difficulties when they found out that confectionery giant Mars owned the Misfits trademark. So they decided to change tack, rechristening the company Oddbox.

Part of their appeal towards conscious consumers is not just rescuing food that might otherwise go to waste, but that they refuse to use additional plastic on products don’t need it to maintain a decent shelf life. “We’ll still use plastic on something like baby spinach, but ultimately it works out at around 80% less plastic packaging compared to purchasing fruit and veg and the supermarket,” says Emilie.

They also struggled to get growers on board. Many didn’t want to admit the level of waste in the industry, and were reluctant to entrust their produce to two city workers with no farming experience. Eventually, some were won round, with Oddbox now partnered with around 70 farmer suppliers.

Read more | My eco job: Opening a vegan cafe in one of London's trendiest boroughs

“But for us the biggest problem was to try to educate our customers,” Deepak says. “Trying to tell them, here is an apple which has a blemish or early frost marks so here is what you could do with it instead of wasting it. You can make chutney, you can make apple juice...

“We also want to re-educate people about the seasons. Some people were asking where our fruits and veg were coming from, they were asking if it came from a supermarket rubbish bin. We had to explain that it is not waste and it won't become waste if we can rescue them.”

When Oddbox has a surplus, Emilie and Deepak are determined it won’t end up in landfill. Charities come to collect what they’ve not been able to sell each week and redistribute it to food banks and soup kitchens.

“It's a circular economy, we take food which would go to waste at a farm level and then we also want to make sure that our customers don't waste at home so we give them tips and recipes information,” adds Emilie.

It’s what consumers want, and it seems to be no bad thing.

So far, they’ve saved more than 1.6 million kilograms of perfectly edible fruit and veg from landfill.