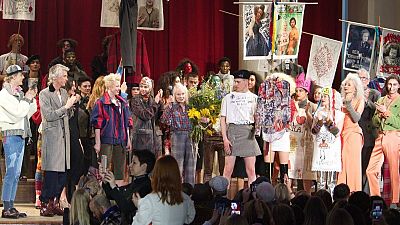 Dame Vivienne Westwood has never shied away from dealing out bold political statements alongside her collections. As one of the first voices calling for sustainability, her punk rock inauguration into British high fashion ensured that protest was at the heart of her designs from the very beginning. During the past twenty years, she has campaigned and fundraised for a number of charities involved in environmental issues even, contentiously, contributing to the UK’s Green Party in 2015. In 1989, dressed as Margaret Thatcher, she appeared in one of the UK’s most famous magazine covers for Tatler captioned “This woman was once a punk”.

Westwood’s Spring/Summer 2020 collection ‘No Man’s Change’ is no exception in this history of politicised fashion as it delivers a bold manifesto for economic revolution. Utilitarian looks with the subtle influence of Westwood's eccentric hand were presented against backdrops of a “wasteland”. A vision of our potential post-climate crisis fate, perhaps? Alongside knitwear, blazers, and the designer’s recognisable aesthetic was a dizzying set of equations explaining her vision for a fairer planet.

Read More | London Fashion Week: Can we buy ourselves out of this crisis?

Westwood outlines this concept on her Climate Revolution website as being “a complete strategy to save the earth” based on the idea that ownership of land is the source of the global corruption that has supposedly led to climate change. Her scheme, the entirety of which can be decoded from a deck of cards created by the designer, posits that the rental of land for the profit of the public is the only way to shed the shady history of the “Rot$” (standing for the ‘rotten financial system’). She places the start of this corrupt system in the 18th century with the first theories of a market that self-regulates and tracks it through her long term enemy Margaret Thatcher to modern tech companies avoiding tax.

The punk feel is abundantly present in Westwood’s cards. The three of clubs is a crude pencil sketch with dark, handwritten text that practically shouts its allegation that “politicians r dickheads + bruisers: no clue what to do” next to phallic symbols. One, the king of diamonds, invokes author E.M. Forster’s 1928 short story ‘The Machine Stops’, an exploration of the collapse of society.

It’s a strong statement for the eponymous visionary behind a large fashion brand but with various fashion bosses making their opinions on the climate crisis known, it's important to note that Westwood has been calling for action on climate change for quite a while.

In 2013, at the release of her 2013/14 Fashion Week collection, she placed a ‘Climate Revolution Charter’ written on the reverse of the show’s production notes under each seat. This move garnered criticism from Eluxe Magazine as at the time Westwood’s company was still creating nine collections a year from plastic-based materials, many of which were being produced in China. Added to this were stories of unpaid interns expected to work over 40 hours a week which didn’t appear to sit particularly comfortably with her cries for the redistribution of wealth.

As part of the Global Design Forum this September, Westwood delivered a Keynote Speech titled “Sustainability revolution: The role of activism in designing a sustainable future”. At the open of the speech, she stated “we haven’t got time to talk about fashion at the moment” before launching straight into a breakdown of her esoteric take on the condition of the world’s economy. “I am the only person as far as I know that says that the rotten financial system is in chronic spin of collapse” she exclaimed, reading from her notes through thick black-rimmed glasses.

She also repeated the claim that Vivienne Westwood the brand has cut collections in half since 2017, something she alleges will encourage people to buy less but better quality items. Despite this apparent reduction in collections, Vivienne Westwood Limited still registered a turnover of over 38 million pounds in 2018. It is difficult to associate these figures with the flamboyant figure stood in front of a packed auditorium at the V&A calling for the end of a system that exploits “human cleverness”.

Behind Westwood, a large banner with two gold snakes eating each other's tales dominated the stage. She plans to sell this banner for 1 million pounds to benefit NGOs she hopes will back her ‘OneWorldRent’ theory. NGOs, she claimed, are the only ones we can trust with being the custodians of this new ownership-free world as “governments are not responsible people, they are working out of their own self-interest”.

The question that always lingers somewhere in the midst of Westwood’s contentious endorsement of revolution is that of her sincerity. A lack of distinct changes in the way that her company operates is one potential factor that unsettles her radical claims of intent. John Lydon a.k.a. Johnny Rotten, lead singer of punk superband the Sex Pistols once called Westwood and her then-husband, Malcome Maclaren “a pair of shysters; they would sell anything to any trend that they could grab onto”.

It is, though, hard to believe that Westwood’s campaigning is purely good marketing. Consistently the designer has gone where others dare not tread when confronting what she sees as injustice as she attempts to make bold statements about fashion and the wider world in her work. It is not, then, a question of personal dedication but one of commitment to the dismantling of a system that has furnished Westwood with the platform to deliver these treatises.