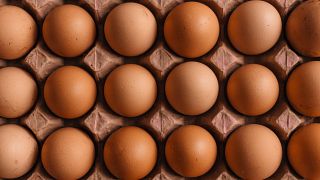 In short? Probably not, but an unbalanced plant-based diet could lead to a deficiency in essential nutrient choline that has links to neurocognition.

An article in the British Medical Journal has suggested that the UK could be heading for a “choline crisis” as increasing numbers of people adopt a plant-based diet.

The article highlights choline as “an ‘essential’ nutrient that cannot be produced by the body in amounts needed for human requirements”. It states that eating a diet that doesn’t contain enough choline could be harmful in the long-term leading to liver disease. Choline is particularly important for pregnant women where it is essential for foetal “brain-building”. There is no evidence, contrary to some reporting, that a lack of choline will make you dumb but it could have an impact on the intellect of your baby if you have a deficiency during pregnancy.

It is recommended by the European Food Safety Authority that the Adequate Intake (AI) for all adults is 400mg a day; one large egg yolk contains 31.5 per cent of this intake. Other sources include liver, prawns and even caviar. Dr Emma Derbyshire, author of the article, writes that “eggs, milk and meat appear to be major dietary providers and further movements away from the consumption of these could have unintended consequences”.

Dr Derbyshire is also a member of the Meat Advisory Panel, a panel that provides information about the role of red meat as part of a balanced diet which is “supported by an unrestricted educational grant from the red meat industry”.

Related | Djokovic wins Wimbledon on a plant-based diet, but he's not vegan

The rise of plant-based diets

According to research carried out by comparethemarket.com, there were over three and a half million vegans in the UK in 2018. With the Amazon rain forest on fire in part, thanks to animal agriculture and the IPCC recommending a plant-based diet as an effective way to help curb the climate crisis these numbers are only set to increase. A vegan or vegetarian diet doesn’t have to mean choline deficiency, however.

Alex White, an assistant Nutrition Scientist at the British Nutrition Foundation told Euronews Living that choline deficiency is “very rare” and “if a vegetarian or vegan diet is healthy, varied and balanced, then it will provide some dietary choline and we know that there can be a number of health benefits of following a more plant-based diet”. White also added that it was “important to eat a range of plant foods to ensure enough of nutrients like iron, zinc, calcium and vitamin B12 are consumed”.

Heather Russel, a registered dietician working with The Vegan Society said “You do not need to take a choline supplement when you switch to totally plant-based nutrition if you eat a balanced and varied diet containing plenty of minimally processed plant foods. The evidence base shows that this way of eating can support excellent health”. In a statement, they also added that the British Dietetic Association shares the message that vegan diets can contain enough choline explicitly saying that “you absolutely can meet requirements with a vegan or plant-based diet”.

Not just a vegan problem

A ‘choline crisis’ may not be due to increases in plant-based diets either. Although there is currently no data on UK choline intakes, the US Department of Health states that most people don’t achieve recommended amounts of choline but few actually have symptoms of choline deficiency as our bodies can make some of the nutrient itself. Without accurate data for UK intake, it is impossible to say whether vegetarian or vegan diets may be contributing to low choline intake.