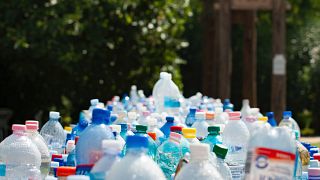 The city of Rome is offering discounts on public transports in exchange for recycling plastic bottles
By Rachel Graham  •  Updated: 30/07/2019

Commuters in Rome can now earn five cents towards public transportation tickets for every plastic bottle they recycle at special machines around metro stations.

The city of Rome has unveiled three test machines and the transaction works via a scan on users' phones.

"It's really good news for our city," says Adolfo Franzo, a Rome resident trying out one of the machines.

"I believe there will be endless queues so they will need more plastic collection machines," he adds.

According to Rome's transportation authority ATAC, those five cents go to the passenger's account in partner apps, "MyCicero" or "Tabnet," which can be redeemed for public transportation.

"In times when we talk a lot about crypto currency we have the plastic currency, a system where we help to collect and recycle and at the same time we build a loyalty link with our customers. The good habits of local residents will also be rewarded," adds ATAC President Paolo Simioni.

It seems people are universally optimistic about the scheme’s success. Residents believe that just three machines won’t be enough to cater for demand.