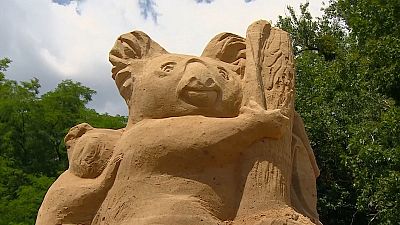 The temporary sand statues being crafted in this park honour species on the verge of extinction.

They will sit in a park in Poznan, Poland, until the elements break them down and take them away. The decision to use sand was a conscious choice, so their fleeting lifespans might represent the short time left to safeguard these creatures.

Each has been designed and brought to life by an all-women team of 10 Polish sculptors who aim to draw attention to the human activity which has brought these animals to a state where they are classified as threatened, vulnerable or endangered.

They hope the installation will get people thinking about their responsibility towards nature. Included in the display are koala bears, frogs, beetles and penguins, made from 500 tonnes of wet sand, before being preserved until the end of August with an eco-friendly glue.

The finished works are a range of shapes and sizes, with some towering as high as three metres.

"We're killing all the living things on this planet," says one sculptor, who declined to give her name.

"There are so many species I could sculpt. I think it's important to talk about this, and to show it with sculpture. Young people enjoy it, and they're curious about what all these sculptors are up to."