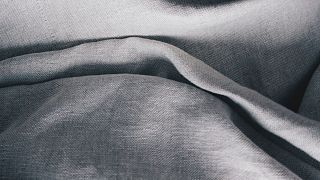 Linen is thought to be one of the oldest fabrics on earth, almost as old as clothing itself. Fragments of the textile have been discovered in Swiss dwellings from around 8000 BC and dyed linen fibres found in Georgia have been estimated to be roughly 36,000 years old. Eco-friendly brands have been turning to innovative new materials like Tencel and Pinatex to increase the sustainability of their apparel but what if a solution could be found in a more ancient process?

Linen is made from the woven fibres of the flax plant. Flax is incredibly easy to grow requiring very little water; most farmers let nature do the work. This means that over the lifetime of a linen garment it uses just under a quarter of the water that its cotton counterpart would. Not much eats it reducing the need for pesticides and most parts of the plant can be turned into something useful.

Perhaps of greater interest to our fossil fuel hungry society is that Flax plants trap massive amounts of CO2. The European Confederation of Flax and Hemp (CELC) state that one hectare of flax retains 3.7 tons of CO2 every year; that's equivalent to the emissions from the average car if you drove it for nearly 6 days without stopping. In France alone the current Flax crop absorbs the same amount of CO2 each year as would be emitted from a light bulb being lit for over 2 million years.

Just the strong sinewy interior fibres are spun into thread for weaving so the woody outside has to be rotted away in a process called ‘retting’. This process produces the most pressing environmental concern as faster, chemical retting can cause toxic pollution. Chemicals are not the only option, however, and heritage hand retting techniques use only sun and rain to break the plant down. The resulting flax fibres are then dried, combed and spun together to make the linen fabric.

Could linen clothes be the answer?

Weaving flax fibres into linen fabric is a skilled art. Most of the processes that go into making the textile have been mechanised but hand weaving is still the preferred method of many artisanal linen manufacturers. Its labour intensive, then, but this added cost is counteracted by the incredible durability of the fabric. When it comes to weaving the longer the fibre, the higher the tensile strength of the fabric and flax fibres have the potential to be incredibly long. Linen clothes only get better with age, becoming softer and more absorbent over time making them ideally suited to towels and bathrobes.

Linen is incredibly versatile, though, as it can be turned into materials with varied properties. Many eco-conscious brands are now choosing it as an alternative to cotton bringing linen trousers, dresses, and shirts back into fashion. Without being dyed, linen can be made in an array of natural colours that create a neutral palette perfect for capsule collections wanting to distance themselves from the wastefulness of fast moving trends. If produced consciously, then, Linen could provide one answer to the fashion industry's sustainability problem.