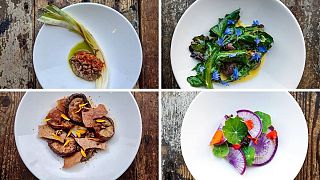 In 2015, Silo opened its doors in the picturesque British seaside city of Brighton. But this was no ordinary restaurant. The man behind the idea, chef Douglas McMaster, is on a mission to start a radical transformation of the restaurant industry, with a zero waste establishment.

Over the five years the restaurant has existed, Silo has become a real pioneer of the zero waste industry and just two years after opening, won the prestigious Observer Food Monthly award for ‘Most Ethical Restaurant’. Doug and his team choose food sources that respect the natural order, allowing ingredients to ‘be themselves’ without unnecessary processing. By creating everything on site, deriving from its most whole form, Silo captures real food, and real food tastes better.

Living caught up with Blair Hammond, Doug’s partner at Silo, at this year’s St. Petersburg Gourmet Days to talk all things zero waste.

What exactly does it mean to be a zero waste restaurant? Run us through the processes employed to completely eliminate the term “waste”.

“We work directly with farmers - that’s the best way to sum it up. Everything is direct, no middleman. That way we get the best conversation about and between products. The farmer tells us what is available - and we ask the farmer what is sustainable. This creates trust, creates a relationship – farmers have had a hard time because they’ve been told all kinds of stories. We stay away from wholesale because it produces waste and compromises quality.”

“To truly eliminate waste, we have to challenge all of the producers we work with, to use reusable containers, to avoid single use plastic and those sorts of things. We talk directly with all our suppliers so everything comes in reusable crates, etc. and specifically request produce not to be wrapped in plastic because although it’s an answer, recycling is not the best answer. We’re constantly working towards upcycling not recycling: new life, new respect, new design to old things. There’s no bin in the restaurant for that very reason. Everything that comes through our door goes back as compost.”

Where do you draw inspiration from when coming up with dishes at Silo?

“From the farm itself. Seeing how much effort farmers put into the products, what makes them happy, what they tasted that week and then sharing that dialogue. They tell us what they love, for example, a particular batch of carrots. They tell us a story and that makes us want to do everything with a loving view and remember how precious food is. If it’s a beautiful tomato we don’t want to cover its beauty by making it a side dish or something, because you can make something so ordinary taste so satisfying and incredible.”

Silo’s been open for five years now. What sort of observations can you make about the zero waste movement after being directly involved in it for half a decade? Do we still have a chance to save the planet?

“At the start, out ideas were too new, not everyone understood what we wanted to get at. Nowadays food is so far away from us, we’re so disconnected – for us food comes in a bag. We’re bringing back respect for products, learning more from nature, and learning not to mess around with nature.”

“Can we save the planet? I would never want to say yes or no for sure. We could have certainly done with more people embracing zero waste 5 years earlier on…but there has been a lot of interest, lots of good questions and lots of honest people stepping forward that have taken on the responsibility to change. We need to make this info more available.”

When it comes to fine dining, going zero waste is the movement of the moment. But is it here to stay?

“It’s weird to call it a trend. It’s going to become another technique. It’s like making a cake - it’s not a trend. To call it a trend isn’t the right approach. It needs to be a new technique that everyone will adopt, needs to be taught in culinary schools and to kids. Food will always adapt and this will just become how restaurants operate. Becoming more conscious is not a trend, it’s just the logical evolution of food.”

Silo’s moving to London in September. What can we expect to be different?

London will at some point be 100% zero waste – mark my words. We’ve always had some issues due to human error in Brighton. In London, if we somehow fail to be 100% zero waste, we’re going to showcase this, we want to work it into restaurant. If stuff accumulates, we will show it. To do this, we’re partnering up with a bunch of super cool people. Smile Plastics (https://smile-plastics.com) melt waste into beautiful plastic sheets. A gent in West London makes knife handles with used plastic. We’re going to be no gas, just open fire cooking.”

“We’re going to be working with Dr. Johnny Drain (http://drjohnnydrain.com), a cook with a PhD in materials science. He was at the Nordic Food Lab (nordicfoodlab.org), is the editor of MOLD Magazine and is just overall one of smartest men I have ever met. He’s a true fermentation expert so he will run the fermentation program. Silo’s also moving away from being a ‘traditional’ restaurant. For example, the second floor will be an art space where people can create things using whatever waste we produce.”

“Doug is the strongest when he’s in the kitchen. When someone like that has to be pulled out to do managerial stuff, it’s not the most productive thing. We are both chefs and allowing him to focus on food is his strength, while I take care of the ‘official stuff’. He speaks in a different language: he speaks in shapes and sounds and very much in metaphors. I need to understand when to just let him create and be himself. We’ve found this perfect balance. Some of the dinners we’ve done were just incredible. I have an endless amount of patience and I’m just grateful to be able to come to a place like St. Petersburg or go to Brazil together and to be opening up in London.”

You recently collaborated with Patrón Tequila for their Patrón Secret Dining Society. Any other cool collaborations coming up?

“Our new partnership with Crate Brewery in East London is the big focus of the moment, we’ve been putting a lot of focus on London and being able to evolve from Brighton. Crate has given us, not only the space to operate the new Silo, but also an opportunity to learn from one another. And we’ve learned so much from one another by now! As things progress, there are questions you don’t know answers to. Crate teaches us more structure and doesn’t make us compromise the vision of Silo.”

Silo has won a number of prestigious awards and is about to open shop in London – what’s next after this?

“Doug’s got a Zero Waste Blue Print book coming out, which he’s been working on since Brighton opened. It’s been the journal of all our failures and triumphs. It’s a centralised document that everyone can share and add to, because different chefs in different places will have varying issues and this way we can all keep learning from one another.”

Is your idea to create a ‘zero waste certification’ to help guide restaurants maximise their resources to minimise waste, realistic?

“Everything we say has to be realistic. We’re dreamers but also very practical. Is it a goal that will happen next week? No. But we’re constantly tyring to figure things out and maybe it won’t be us, maybe someone else – like the government for example – who will say that we need to put this into play and develop the classification system.”

For those who will not be making it to the UK any time soon, what are some of your favourite restaurants around the world that share your philosophy?

“What I love about Silo is that we have had a number of people from all around the world work with us and then go back home with our vision and philosophy. FREA (https://www.frea.de) in Berlin or Cesar Costa Cortella in Sao Paolo for example, we spent a week with him and it was so comforting, we felt like we were in Silo but with Brazilian flare).”

What tips do you have for our readers wanting to start on the zero waste path when cooking at home?

“Think as direct and local as possible. Ask as many questions as you can about where you get your stuff. Be aware of reducing plastic use. Question everything: where it comes from, how it got to you, is there an alternative?”