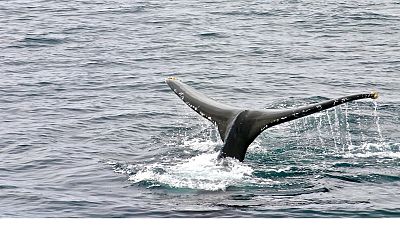 You may not expect to see a whale in the middle of Manila but this surprising sight is how one Filipino artist chose to raise awareness of the effects of plastic pollution on marine life – it was constructed using the plastic waste found on the shores of the Philippines.

It is not the first time that a whale replica has been seen in the country. Two years ago Greenpeace Philippines made a bold statement about plastic pollution by placing the art installation "Dead whale" on the beach of Naic, Cavite, south of Manila.

A 2015 report by the environmental campaign group Ocean Conservancy and the McKinsey Centre for Business and Environment named the Philippines as among the five Asian countries which contribute around 60 per cent of the plastic waste leaking into the oceans.

One of the latest incidents drawing attention to its devastating effects was seen in March this year; a dead whale was found on a shoreline in the southern Philippines, with more than 40kg worth of plastics found in its belly.

This is the event which inspired Filipino artist Biboy Royong, who sourced plastic bottles, garbage bags, straws and other waste from various establishments in the Philippine capital for his sculpture, which depicts a dead sperm whale carrying an unborn baby in its womb.

Click on the video above to learn more about this installation.