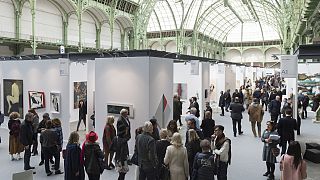 It's the place to be in the French capital this spring — Art Paris Art Fair 2019 has opened its doors (the doors of the majestic Grand Palais, to be precise) with 150 exhibitors from 20 countries showing at the exhibition.

The event is recognised as a leading hub for modern and contemporary art, this year running from April 4 to 7, offering an exhibition of European art from the post-war years to the present day. But the 21st edition converges towards new discoveries of international creations with two special themes – Latin American art and the work of French women artists.

Curated by AWARE (Archives of Women Artists, Research and Exhibition), the fair presents an overview of the work of women artists in modern and contemporary art, with 25 projects selected from among the participating galleries. But in reality, there are many more participating women artists this year, says AWARE’s chairwoman Camille Morineau, thanks to the number of galleries committed to increasing the visibility of their artists, whatever their gender.

The number of women artists at the fair has increased by almost 50 per cent and 43 per cent of the solo shows feature women.

The fact that many galleries decided to put female artists in the spotlight, Morineau thinks, makes it a great way to discover through Art Paris the importance of women artists in the French scene and throughout the 20th century.

“I think we have a quite exceptional representation,” agrees Art Paris director Guillaume Piens.

Confirming that women have been underrepresented and undervalued in the art market throughout history, Piens says that despite making up the majority of art school students, female artists make up only 15 to 35 per cent of exhibitors at art shows.

AWARE was invited by Art Paris to curate A Gaze at Women Artists in France, in recognition of their commitment to giving visibility to 20th-century women artists.

“It is fundamental that the general public, and not only the art specialists, ask themselves these questions, and discover until which point the art market has been unjust with women,” Morineau maintains.

The other theme of this year’s Art Paris is Southern Stars: An Exploration of Latin American Art from the 1960s to the present day, led by independent curator Valentina Locatelli. This thread is showing around 60 Latin American artists, in parallel with the presentation of the Catherine Petitgas private collection and conferences at the Maison de L’Amerique Latine.

The intention to highlight Latin American art comes as a statement from artists and curators worldwide to remove geographical hierarchies in the art world, explains Locatelli. After decades of undervaluation and marginalisation in Western-centric art history, the appreciation of modern and contemporary art from Latin America has increased to a point “beyond the fantastic”.

With this Latin American focus, Art Paris gives the public the opportunity to see what's going on in Latin America, says Locatelli, although, she says, “finding a homogeneous definition would seem completely unacceptable”. However, the historical context of the region has given the movement some shared characteristics, such as their groundbreaking work with geometric abstraction and the conquest to question identity.

How to visit Art Paris

Art Paris is decidedly not an event dedicated to experts, aiming instead to put contemporary art within everyone’s reach. “It is a fair that looks towards exploration. We consider the acquisition of works of art as objects of wonder, and passion, and not only as a financial activity,” said Piens.

In this spirit, tours are being held in partnership with the Observatoire de l’Art Contemporain to help visitors understand the work of modern and contemporary art galleries, which can be booked through the Art Paris website.

“Contrary to what many would imagine, the art market is still retrogressive,” Mexican artist Betsabée Romero told us. But it is initiatives like those at Art Paris 2019 – Southern Stars and a Gaze at Women Artists in France – that can shed some light on the issue. “They are a detonator of cultural processes that generate new social tissue” she adds.

As Morineau puts it: “The world is turning, and it’s turning in the right direction.”

Watch some of our social media coverage