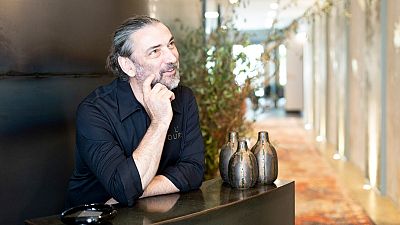 When you enter Jacky Ribault's restaurant, L'Ours (the bear in French), you're setting foot on a whole new dimension and you suddenly seem very far away from Paris’ noise and pollution. A massive bear sculpture sitting in the entrance welcomes you in this confidential atmosphere. The glass ceiling lets the sunshine in, but as soon as night falls, a chandelier made of floating candles - imagined by renowned designer Sylvie Maréchal - lights up in the air.

"It's just like Cocteau's cinematographic adaptation of Beauty and the Beast!", explains Chef Jacky - the beast himself, hidden in his cavern-line kitchen. The walls, painted by Solène Eloy, depict an abstract natural landscape. Dried up flowers in transparent vases add a touch of colour in this rough industrial decor, where appetizers are served on warm stones and food is eaten with carving knives in leather sleeves.

"I wanted this place to be poetic and authentic", describes the Chef. “The flowers are dried up and the water in the vases is cloudy because that's how it actually happens in the forest. It's the cycle of life, plants inevitably die but it doesn't mean they're not beautiful when they do".

Out of sight in his marble kitchen, the bearded chef praises the work of his interior designers as well as the support of his wife who chose most of the furniture. But this bear's state-of-the-art cave is undoubtedly the wine cellar he built in the ground. During meals, clients are invited to follow the house's sommelier and walk down the stairs of this architectural feat to pick a bottle or two.

This is the second restaurant of Chef Jacky Ribault. Eight years ago, this cook native from Brittany opened his first gourmet eatery called Qui plume la lune http://www.quiplumelalune.fr in Paris 11ème, where he still works twice a week supervising the eco-friendly kitchen he implemented. The cuisine relies on collaboration with small producers that provide exclusive seasonal and ethical products.

He has kept this mindset in this new venture. In fact, just five months after its opening, L'Ours has been selected as one of the most sustainable fine dining restaurant in the French capital. "I own 14 chickens that eat all our compost. But, our truly ethical deed is cooperating with hundreds of little farmers selected by a company named Terroir d'Avenir, who stocks and refrigerates products in Paris, allowing us to choose what we're going to cook every morning. We deliberately spend three to four times more money but we're sure of the provenance of our ingredients and have no doubts about their quality" the Chef explains.

"We also have a vegetable grower in the outskirts of Paris. What I especially love about him is that you simply order a basket without knowing its composition. You'll get what has been reaped in his garden, so it's different every time! It's challenging and stimulating, never knowing exactly what you're going to cook. In addition to this, people suffer more and more from all kinds of allergies or have certain dietary requirements we have to adapt to! In a way, it's easier not to have a menu.” he adds.

Unlike other Chefs, Jacky finds it quite easy to cater for vegetarians and vegans. "We always have at least ten different kinds of vegetables in the kitchen! And there are so many sorts of cereals... I love working with these products and have a lot of fun creating vegetal sauces, using exotic fruits for instance. Frying kale and adding yuzu juice on top is one of the recipes we've had fun trying out" he describes.

This Asian influence, very interrelated to his cuisine, first came to him two decades ago when he started working at Shozan, the first French-Japanese restaurant ever opened in Paris. He travelled throughout Japan to master the traditional techniques before heading to Florence to open a fusion restaurant for Salvatore Ferragamo. Ever since, he can't get enough of Japanese products: his stock soup with trout eggs marinated in sake as well as his ginger teriyaki foie gras topped with nori seaweed can hold their own against their Asian competitors. "And Japanese cuisine is extremely healthy!", he adds.

The Bearded bear, after a near-death experience during surgery six months ago, recently discovered another symbolic side of the ursine figure: "strength and revival", he tells us. And that's exactly what his cuisine appears to be: strong flavours that resuscitate nature's ingredients.