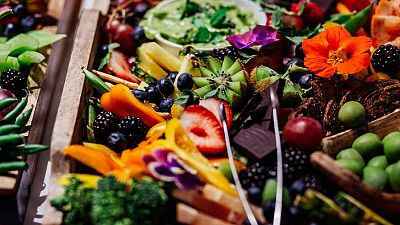 According to the European Environment Agency, the amount of waste generated by the EU in 2014 exceeded 2.5 million tonnes. The highest amount recorded in the past decade! In the light of this number, we decided to look into companies that do things differently and implement an eco-strategy at the core of their business. And where best could we start but to look into Lyon's food scene where three inspiring businesses are leading the way to a cleaner future. We went to meet them.

Less than a year old but already a local hit, A La Source! is a zero-waste premium grocery store selling local and organic produce, in bulk or in liquid. Customers can choose to either bring their own containers or buy reusable jars and upcycled bags in the store, thus eliminating disposable packaging responsible for generating a lot of waste. Refrigerated products that begins to go bad are available on the app Too Good To Go and delivered directly to the customer. Whatever is left, goes to an on-site compost.

Nestled inside a refurbished 200-year-old library space decorated with bamboo and repurposed bookshelves, this coffee shop "with a soul" as the owner Bernard Goret puts it, was born out of a collaboration with Belgian chocolate company Newtree. “I felt it right away when I entered this space. Our aim was to create a space where people would feel rested”, he comments. Newtree Café works exclusively alongside ethical and local suppliers of organic produce, which are sold in reusable glasses or ceramic containers. An on-site compost produce 1.5 tons of compost a year that is collected and donated to local gardens or schools.

The future is here, and it may not suit everyone's taste... The aim of this particular project is to reduce the environmental impact of a carnivore diet by finding alternatives to meat and normalizing the idea of using... insects in gastronomy. Les Fruits de Terre (literally Fruits of the Earth) is a plant and insect-based cafe, co-founded by Charlotte Allix. According to Allix, insect farming is a lot less demanding in energy and water, and the final product is rich in amino acids, vitamins B12, omega 3, 6, 9, iron, and zinc. On the menu: the already iconic “steak” made from organic chickpeas and mealworm flour.