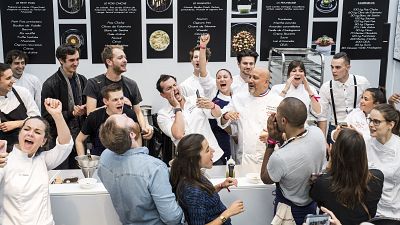 During four days, Taste of Paris brought together la crème de la crème of chefs, producers and suppliers of French cuisine beneath the glass dome of the Grand Palais in Paris. The event, which was launched 14 years ago at Somerset House in London, has become one of the most prominent gastronomic festivals in the world, covering more than 20 cities including Milan, Chicago, and Cape Town.

The Parisian version, which received more than 30.000 visitors, hosted pop-up restaurants offering mini portions of grand dishes made by award-winningchefs at a very affordable price; from 4 to 12 euros for courses that cost at least 100 euros in real life. The other highlight of the event is the possibility to meet directly with them.

"It is true that 30 years ago being a cook was considered as snobbish and derogatory. Nowadays, being a chef is something prestigious and cool", said Arbaelez. His stand was liven up by Colombian songs and the cook danced whist taking selfies with visitors. "I love direct contact with people, it is life-giving", he added.

Chef chose their signature dishes specially popular with the public. "These berlingots are very symbolic of my kitchen", explains Anne-Sophie Pic, "they are cooked differently according to the seasons. It's a pastry based on the model of Romans ravioli, filled with a creamy sauce of great aromatic complexity", she explained reffering to her famous « Berlingots with lightly smoked Banon goat cheese, and ginger and bergamot-infused watercress ».

Besides Pic, the only French woman chef awarded with three stars by Michelin’s guide, Romain Meder, one of the festival's most requested chefs, and Nicolas Sale of the Ritz Paris were also part of the cast.

The trade-show also gave room to the French pâtissiers such as Cédric Grolet of Meurice, named best restaurant’s pastry cook of the world by the prestigious association "Les Grandes Tables du Monde" at only 33 years old.

His best-seller sold at his ephemeral restaurant was the traditional Noisette en trompe l’oeil. "This dessert is part of my 'sculpted fruit' collection" he said. "It's fully handmade and delivers the absolute experience of 'firework' in the mouth with the hazelnut meeting the sweetness of creamy caramel and crunchy praline », he described.

The chefs were not the only stars of the event, the fifteen best producers and suppliers of the French starred restaurants were also part of the show: Calvisius caviar, Salma salmon, Alain Milliat juices, Kalios olive oil, among other delicacies excited the taste buds of visitors.