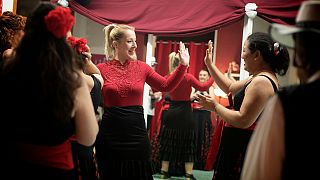 It’s early on Thursday morning but Casa Candela, a school dedicated to teaching flamenco in the centre of Barcelona, is already bursting with energy. Some of the female students are being helped into large and colourful skirts and flamenco shoes. One man is already practising on his cajón, a box-shaped percussion instrument that add a lively rhythm to the dances. The excitement is palpable. The group is preparing two flamenco dances to show in June, the Bolero a Marco by virtuoso flamenco composer Vincente Amigo and a tango known a Noche de SanJuan by la Niña Pastori.

This class is one of a kind. Dedicated to people suffering from psychiatric illnesses, it aims to improve their mental health and to boost their well-being by integrating them into the noble and artistic world of flamenco. The initiative was launched in 2015 by Anna R Ximenos, a psychologist at CPB - SSM, a mental health clinic in Barcelona. One of her patients had expressed an interest in dancing flamenco, as she had done so during her childhood.

Ximenos approached Monica Batiste, the director of Casa Candela, where her daughter was taking flamenco classes. Batiste’s sensibility, the rigorous methodology implemented in her school, the professionalism of the teachers, such as the brilliant choreographer Javier Jurado, and the fine balance of firmness and gentleness which they all bring to the classes made Casa Candela an interesting place to initiate the project.

After a short and successful pilot project, a weekly class was launched in 2016 for a dozen of mental health patients, and it has been ongoing since then. “When we started, we were worried that our peers would not approve what we are doing here. But we have a very scientific approach, we conduct observations and assessments of flamenco’s effects on patients, and with the psychological and physical benefits we have been able to show, we have actually received a very good response from our colleagues. They refer patients to us, and we now have a waiting list of people who would like to join the program,” Ximenos says.

Flamenco is a particularly expressive dance, which allows people to show their emotions in a way words can’t always do. Characterised by a variety of melodies and rhythms, flamenco is a mix of cultures, taking its roots in folkloric dances from around the world. But it’s not just a dance: it’s a real art, merging music and movements, and for those who engage in it, it often provides them with a second family.

It’s little wonder then that flamenco is recognised as a World Heritage Treasure by UNESCO. “The students that come here know they are part of something big, they are an elite with a knowledge of an art seen worldwide as worthy of protection and recognition. This has a huge impact on the way they see themselves, and it gives them a sense that they part of a community, of a whole culture with its rich history,” says Batiste.

While anyone who takes up flamenco can quickly see the benefits for their well-being, these positive effects are perhaps even more impressive in people with mental health disorders. “I have seen some of the students make immense progress in just a few sessions learning flamenco with Monica and the other teachers, with positive results that we usually take years to achieve in therapy,” Ximenos points out.

Most of the students indeed to appear to exhibit a renewed self-esteem after just a few classes, and they are able to slowly reconnect with their body. They are soon able to make eye contact with others. “When we go out to see dances or to show the work we do in class, professional hairdressers and makeup artists help the dancers get ready. This is a very important part of the process as well. It allows them to reclaim their body and to feel attractive,” Batiste says.

Other physical benefits include weight loss, improved balance and coordination, as well as a loosening of the muscles (which can be quite rigid in some cases due to medications). Flamenco, with the discipline it requires, is also a great practical way for the students to learn to focus on the present moment and to create something with others. When they dance, people are no longer isolated, they see themselves as part of a group, and as useful to it.

“Flamenco is a dance with codes to follow, it forces you to pay attention, and to centre all your thoughts on the present. Focusing on the ‘here and now’ and not dwelling on the past is a concept that is central to therapy and brought about in a very concrete way by flamenco” Ximenos says.

On a social level, the strong links created during the class are often maintained outside, and everything is done to encourage the students to meet up in their free time, in order to create strong bonds between them, and to rebuild social networks. The students are also given an opportunity to give back to the community, by going into retirement homes for instance to teach flamenco hand movements, which can help some elderly people combat pains in their joints.

“The philosophy behind the whole project really is about dignity and integration, but not in a patronizing way. These students are treated the same way as other students, they are welcomed in the beautiful family that is flamenco. They get benefits out of it, improve their well-being and quality of life. But they also give us teachers a lot in a return, with all their commitment and devotion,” Batiste says.

Convinced that this form of therapeutic flamenco is a great way forward for patients, Ximenos and Batiste now want to develop the project further. In July, they will present all the outcomes they have achieved at the International congress on psychosocial rehabilitation in Madrid . At Casa Candela meanwhile, there are plans to open more groups for people suffering from mental health issues and to launch training classes for people wishing to teach such classes, with the hope that the concept will one day be replicated elsewhere in Spain, and potentially, in Europe.

Beiteddine Art Festival in Lebanon is a real treat