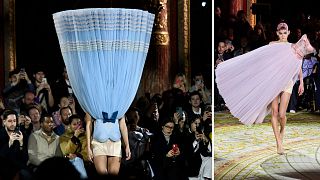 And let's just say, it's not your average catwalk.

Models walked the runway in floor-length gowns with stiff tulle skirts and sequinned bodices. But things took a turn for the bizarre when a dress detached itself from the model's torso and was worn slightly in front of her.

As the show progressed, the dresses became more and more unusual.

A dress was worn horizontally, with the bodice in front and the skirt in back; another was flipped completely upside down, with the skirt covering the model's face.

"It's an absurd take on the stereotype of a certain type of femininity," said 54-year-old Rolf Snoeren after the show.

"It's the archetypal couture gown that we all know with the boustier and a big skirt. But then we twisted it to make it more in line with the 21st century, which is pretty absurd," added the designer.

The one-of-a-kind event was attended by a number of A-listers, including pop superstar Doja Cat, who after showing up all red in 30,000 crystals and body paint to Schiaparelli's show earlier this week, this time rocked up in a pinstripe brown suit, with a fake moustache, goatee, and brows.

She certainly knows how to make headlines in the fashion world. Take a look for yourself:

Check out the video above to see the most absurd dresses from the show.