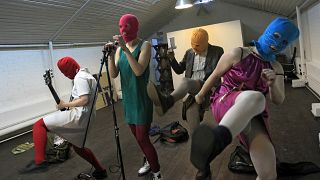 “Velvet Terrorism: Pussy Riot’s Russia”, an exhibition being held at the Kling & Bang gallery in Reykjavík, Iceland, is the first ever retrospective of the Russian feminist protest art collective.

The exhibition, which has been on display in Iceland since 24 November 2022, incorporates photos, archive footage and original artwork to trace the group's work over the past decade and their rise to fame.

It was curated by Maria (Mösha) Alyokhina, a key member of Pussy Riot, and offers a look at documentation of the activists' performances, from the beginning of the movement in 2011 to the present day.

The performances are presented in context – lead-up, performance, reaction – and thus shed light on the oppression and harshness of the dictatorship that has escalated in Russia over the last ten years.

"The number one goal I think of this exhibition, during the war, is to show what was happening inside Russia all these years because unfortunately there was not so much attention about inside Russia repressions," explains Alyokhina.

A quick guide to Pussy Riot

The group gained global fame in 2012 when three of its members (Yekaterina Samutsevich, Nadezhda Tolokonnikova, and Maria Alyokhina) were arrested and convicted of hooliganism for performing a "punk prayer" in Moscow's main cathedral, protesting the close relationship between the Russian Orthodox Church and the government of President Vladimir Putin.

The group filmed the performance and posted it online, where it quickly went viral.

Their trial and subsequent imprisonment sparked international condemnation and brought attention to Pussy Riot's cause and the broader issue of freedom of expression in Russia.

Since then the group has gone on to perform at concerts with pop superstar Madonna (who has vocally supported the collective since 2012), appeared on Glastonbury’s Park Stage in 2015 atop a military truck, and invaded the pitch dressed as police officers during the Russia World Cup Final.

Amid the context of Russia's invasion of Ukraine, the group are active more than ever.

They recently released a new song titled 'MAMA, DON’T WATCH TV', which protests against the war in Ukraine and calls for Russian President Vladimir Putin to be tried for his actions.

In a statement released alongside the track, Pussy Riot referred to Putin's government as a "terrorist regime" and labeled the president, officials, generals, and propagandists as "war criminals".

During their tour, they've been raising funds to support Ukraine and have aimed to raise awareness of the importance of the embargo on Russian fuel and gas.

At the exhibition, visitors are invited to weave their way through the group's guerilla performances and get to know the serious consequences they tend to have.

As you enter the space, the first piece on display is a controversial and provocative video. The footage, shot just days before the opening of the exhibition, depicts Pussy Riot member Taso Pletner wearing a red balaclava and standing on a table over a portrait of Putin. They lift their black smock and proceed to urinate on the portrait before kicking it to the ground.

In addition, the exhibition opens the door to the world of constant police surveillance, fake news, criminal cases against Mösha and Lucy Stein, her fiancée and partner in Pussy Riot, before and during the war.

"What this exhibition does other than just present Pussy Riot’s action is that it sheds a light on the process and the workings of the Russian state. And I think that is something that is very interesting and very important to show, it is very relevant to our audience," says Ingibjörg Sigurjónsdóttir, a co-curator of the exhibition.

"So we are extremely proud of having this exhibition here."

Check out the video above for more footage of the exhibition, which lasts until the end of the month.

'The only thing that should be banned is the FSB,' says Pussy Riot